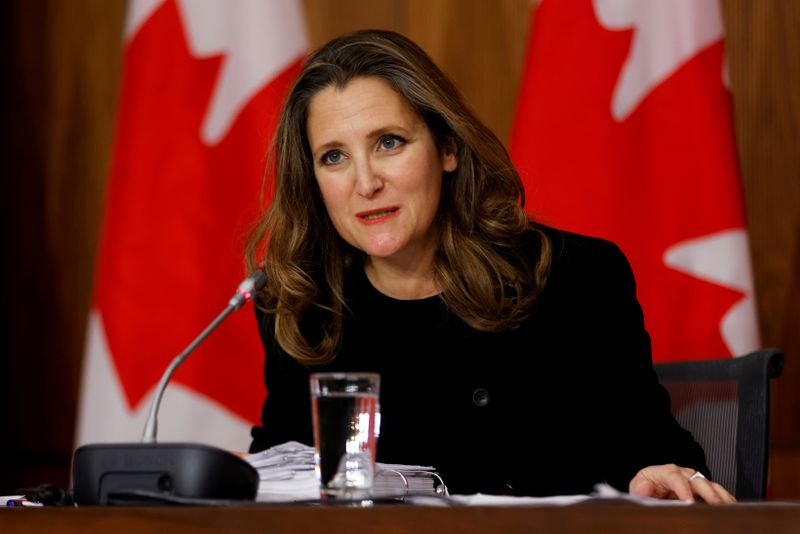 
OTTAWA (Reuters) – The COVID-19 pandemic and its damaging impact on women has underlined the need for a national childcare plan, which would also help the economic recovery, Finance Minister Chrystia Freeland said on Thursday.

Since taking up her job in August, Freeland has repeatedly spoken about a “feminist agenda,” and has said childcare will be part of a stimulus package worth up to C$100 billion ($79.6 billion) over three years. She will unveil details in her April 19 budget.

“I really believe COVID-19 has created a window of political opportunity and maybe an epiphany … on the importance of early learning and childcare,” Freeland told a online convention of Canada’s ruling Liberal Party.

The budget is set to be a springboard for an election that Liberal insiders say is likely in the second half of the year.

Canadian governments of various stripes have mused about a national childcare program for decades but never acted, thanks in part to the cost and also the need to negotiate with the 10 provinces, which deliver many social programs.

Freeland said a childcare program would help counter “an incredibly dangerous drop” in female employment since the start of the pandemic.

“It is a surefire way to drive jobs and economic growth … you have higher participation of women in the labor force,” Freeland said. “My hope … is that being able to make that economic argument as well is going be to one of the ways that we get this done.”

Freeland, who is taking part this week in meetings of the Group of Seven leading industrialized nations and the International Monetary Fund, said U.S. Vice President Kamala Harris and Treasury Secretary Janet Yellen had told her they saw early learning and child care as a driver for economic recovery.

Bad omen? US dollar and Bitcoin are both slumping in a rare trend By Cointelegraph

Which Bank Stock is a Better Buy? By StockNews