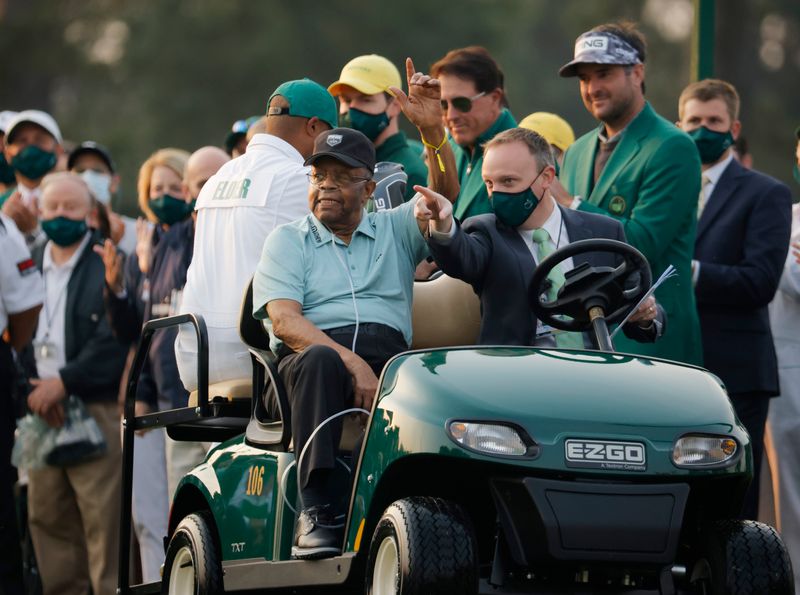 AUGUSTA, Ga. (Reuters) – Lee Elder was warmly welcomed at the Masters when he joined Jack Nicklaus and Gary Player as a new honorary starter for the 2021 tournament that began at Augusta National on Thursday.

A brilliant sun had barely risen over the clubhouse when 86-year-old Elder, the first Black man to compete in the Masters in 1975, was driven to the first tee in a golf cart as a new major season dawned.

Elder has limited mobility and did not hit a tee shot.

Shortly after Elder, nine-times major winner Gary Player, sprightly as ever at 85, emerged from the clubhouse and hugged Nicklaus’s wife Barbara.

He then ventured to the tee with six-times Masters champion and 18-times major winner Nicklaus, who wore a yellow sweater to fend off a slight chill in the crisp morning air.

A gallery of several hundred people were on hand, about the same number who were in attendance when the November Masters was played officially without paying spectators, though members and their guests, as well as media, swelled the numbers.

Nicklaus, 81 and not quite as nimble as Player, also hit the fairway, though his swing was not as fluid and his drive was some 40 yards shorter than Player’s.

With that the 85th Masters was officially underway.

Defending champion Dustin Johnson was due out at 10.30 a.m.

There is a slight chance of rain on Thursday, with the risk of bad weather increasing on Friday and Saturday.

The housing boom, central banks and the inflation conundrum By Reuters