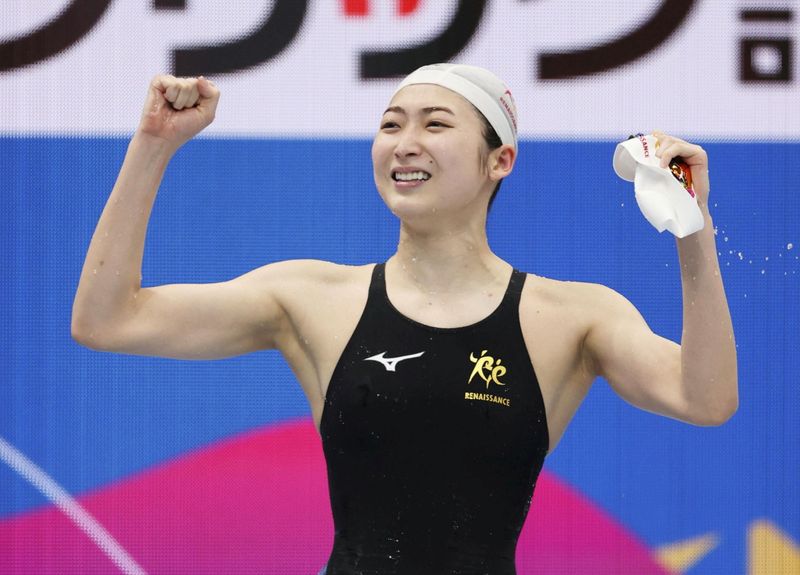 © Reuters. Rikako Ikee of Japan reacts after winning the women’s 100-meter butterfly final at the national swimming championships in Tokyo

TOKYO (Reuters) – Japanese swimmer Rikako Ikee powered to a second Tokyo Olympic berth by winning the women’s 100-metre freestyle at the national championships on Thursday, less than eight months after she returned to competition following her recovery from leukaemia.

Ikee finished in 53.98 seconds, missing the 53.31 seconds she needed to qualify for the individual 100-metre freestyle but punching her ticket for the 400-metre relay at this summer’s Games.

Her triumph comes on the heels of her emotional victory on Sunday in the 100-metre butterfly, which secured her a spot in the 4×100 medley relay – unthinkable only months ago as she was returning to fitness after her cancer treatment.

“I was definitely targeting 53 seconds so I’m happy I achieved that,” a smiling Ikee said in a poolside interview on Thursday at Tokyo Aquatics Center, the Olympic venue for swimming.

“To be honest, I wanted my time to be a little better but I’m happy we were able to form a new relay team,” she said.

The 20-year-old has emerged as a bright spot in the build-up to the Summer Olympics in Japan where many headlines have focused on how organisers will stage the Games during the COVID-19 pandemic.

Her story is a reminder of the power of sport to move people and to inspire, with the mental toughness of athletes to overcome adversity often as compelling a reason to watch as the physical feats they perform.

Ikee, who won six gold medals at the 2018 Asian Games, had been expected to be one of Japan’s top medal hopefuls at the Tokyo Olympics before she was diagnosed with leukaemia in 2019.

She battled back and returned to competition in August last year.

Still, she had brushed off expectations about making it to the Tokyo Olympics and had said she was targeting Paris in 2024.

Ikee will have another chance this week to qualify for an individual event, competing in the 50-metre freestyle.