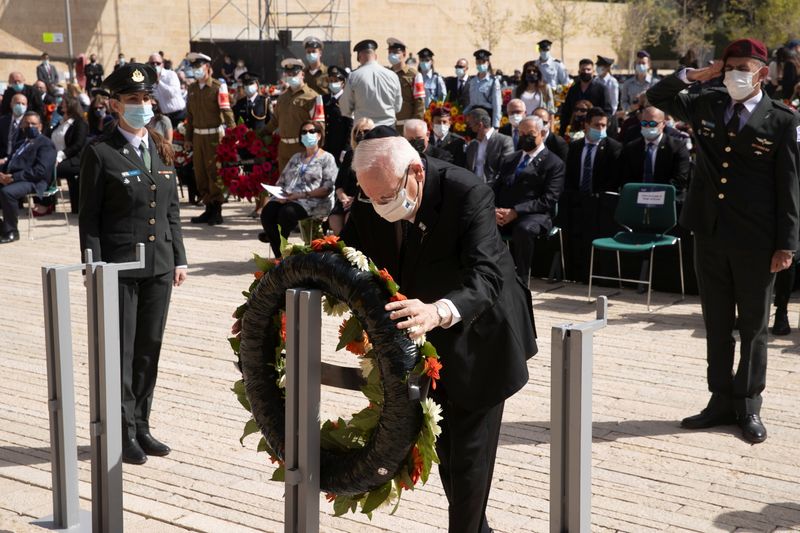 JERUSALEM (Reuters) – A memorial siren brought traffic to a halt in Israel on Thursday as it honoured six million Jews killed in the Nazi Holocaust, and gave thanks for its swift rollout of COVID-19 vaccines as a lifesaver for elderly survivors.

With around 57% of the population having already received at least one vaccine dose, Israel’s infection rate has dropped dramatically.

That has allowed care and nursing homes to open their doors to visitors again, reuniting many of the country’s 180,000 survivors with their loved ones.

Prime Minister Benjamin Netanyahu said 900 in that community had died as a result of the coronavirus. But many times more had been inoculated in time. Overall, Israel has recorded 6,270 deaths from the virus.

“Some we did not manage to reach with vaccines in time, but writ large, the vaccine succeeded,” he said, addressing the survivors at a ceremony marking the start of the annual Holocaust Martyrs’ and Heroes’ Remembrance Day. “You got vaccinated at a record rates.”

Israel’s three national lockdowns, “were difficult for us all, but among many of you, they awakened painful memories of the terrible loneliness of your childhood”.

As the sirens sounded nationwide, traffic stopped and motorists stepped out of their vehicles to stand for two minutes in honour of the Holocaust dead.

In a ceremony in parliament, legislators lit memorial candles and read aloud the names of relatives who perished in the Holocaust.

In Bahrain, one of four Arab countries that established official ties with Israel last year, the Association of Gulf Jewish Communities planned a Holocaust remembrance event on the Internet.

Is the Bull Market Over??? By StockNews