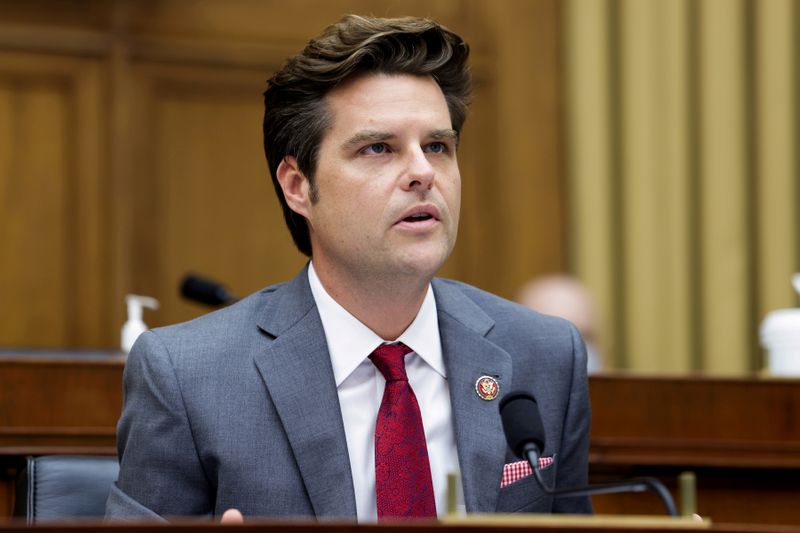 WASHINGTON (Reuters) – A friend of embattled Republican U.S. Representative Matt Gaetz of Florida is expected to plead guilty in a sex trafficking and fraud case in a federal court in Florida, two law enforcement officials said on Thursday.

Prosecutors and defense lawyers are in discussions about Joel Greenberg, a former tax collector in Florida’s Seminole County, entering a guilty plea, and a judge on Thursday gave him until May 15 to do so, the officials said, speaking on condition of anonymity.

Greenberg is a friend of staunch Donald Trump supporter Gaetz, who also faces a federal probe into a relationship with an underage girl, a law enforcement source has said.

Gaetz has not been charged with any crimes and has denied wrongdoing. A Gaetz representative did not immediately respond to a request for comment on Thursday.

At a court hearing in Orlando, Greenberg’s attorneys and prosecutors said they expected a plea deal to resolve charges including sex trafficking of a child, aggravated identity theft and wire fraud, according to local media.

Asked by reporters whether Gaetz should be worried about a Greenberg plea, Greenberg’s attorney Fritz Scheller replied, “I’m sure Matt Gaetz is not feeling very comfortable today.”

Scheller may have been referring to media reports that Greenberg may cooperate with federal investigators in their probe of Gaetz.

In a column published on Monday on the Washington Examiner website, Gaetz declared he had no plans to resign from Congress.

“There are exactly zero credible (or even non-credible) accusers willing to come forward by name and state on the public record that I behaved improperly toward them,” Gaetz wrote.

Congressman Kevin McCarthy, the top Republican in the U.S. House of Representatives, last month said he would not strip Gaetz of his committee assignments absent proof that he has engaged in wrongdoing.