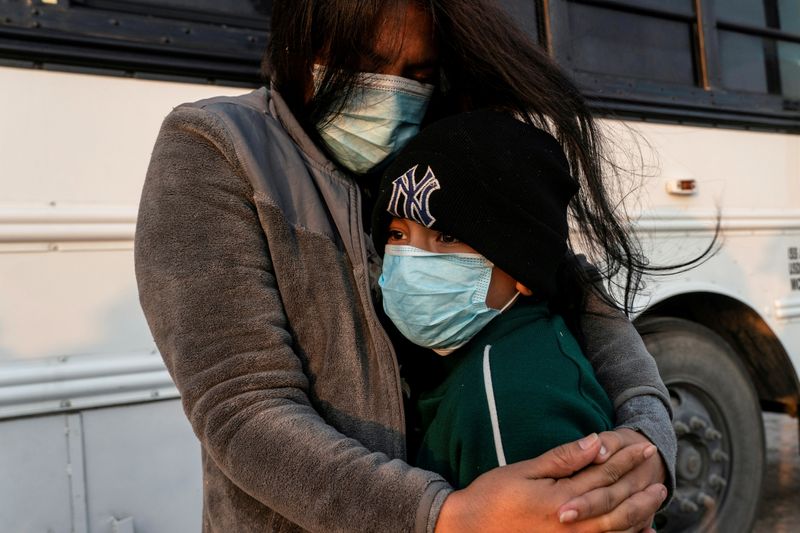 WASHINGTON (Reuters) – U.S. border agents expelled roughly a third of migrant parents and children traveling together and caught crossing the southwestern border in March, according to U.S. government data, undercutting a claim by President Joe Biden that most families are being sent back to Mexico.

About 17,000 of the nearly 53,000 parents and children caught at the border in March were expelled under a COVID-related public health order known as Title 42, an administration official said during a background briefing with reporters on Wednesday.

The rest were placed in U.S. immigration proceedings, in keeping with the practice before Title 42, which was implemented under former President Donald Trump in March 2020.

“We’re sending back the vast majority of the families that are coming,” Biden said during a March 25 news conference. “We’re trying to work out now, with Mexico, their willingness to take more of those families back.”

Commenting on the apparent disconnect between Biden’s statement and the latest figures, White House spokesman Vedant Patel said the administration’s policy is to expel single adults and families to Mexico under Title 42 if they are caught crossing the southwest border illegally, but he added that does not always happen.

“In the event that Mexico is not able to receive an individual or a family, they are placed in immigration proceedings in the United States,” he said in a statement.

Biden has defended his administration’s handling of a rise in border crossings in recent months. Republicans have criticized Biden, a Democrat, for easing some Trump-era restrictions, arguing his policies have encouraged illegal immigration. Biden and his top officials have blamed Trump for dismantling systems to receive asylum seekers and unaccompanied minors.

Overall, more than 172,000 migrants were caught at the U.S.-Mexico border in March, according to the administration official. Of those arrests, roughly 168,000 people were picked up by border patrol agents between ports of entry – the highest monthly tally since March 2001, when nearly 171,000 were caught.

For much of last year, unaccompanied children arriving at the border were expelled to Mexico under Title 42, but Biden exempted them from the expulsions in February.

Since then, a rising number of unaccompanied children have been taken into custody at the border and allowed into the United States to pursue immigration cases. The increase has caused crowded conditions in border stations and processing centers.

In March, border agents caught about 19,000 unaccompanied children attempting to cross the border, the administration official said on Wednesday, up from roughly 6,000 in January.

The administration official, who requested anonymity to discuss the border figures with reporters, said the expulsion of families back to Mexico is limited by Mexico’s ability to receive them in the state of Tamaulipas, which sits across from Texas’ Rio Grande Valley, where many families have been arriving.