AceShowbiz –
The world of cable networks have lost one of their prominent personalities. CNN and MSNBC legal analyst Midwin Charles passed away at the age of 47 on Tuesday, April 6, and many has since turned to social media to express their heartbreak over the shocking loss.

News of Midwin’s passing was first made public by her family via Twitter and Instagram. “It is with a profoundly heavy heart and the deepest sadness that we announce the untimely passing of our beloved Midwin Charles,” their statement read. “She was known to many as a legal commentator on television but to us she was a devoted daughter, sister, aunt, niece and cousin.

“Our lives are forever changed and we will miss her for a lifetime. The family thanks you in advance for your love and prayers. Please allow the family time to grieve,” the Charles family continued. Unfortunately, her family did not specify on what may have caused her death.

In the wake of the heartbreaking announcement, many notable media personalities, politicians and others alike paid their tribute online. “The View” co-host Sunny Hostin remembered Midwin as her friend. “We worked together on In Session/Court TV. She was a brilliant beautiful legal mind,” she tweeted.

“CNN Tonight” presenter Don Lemon has also made use of Twitter to voice his grief over the loss. “My dear @MidwinCharles, We will miss your brilliance, beauty, grace, wit and glowing presence. Our collective hearts are broken,” he wrote. “Rest in power dear lady. #MidwinCharles #RIPMidwinCharles.” 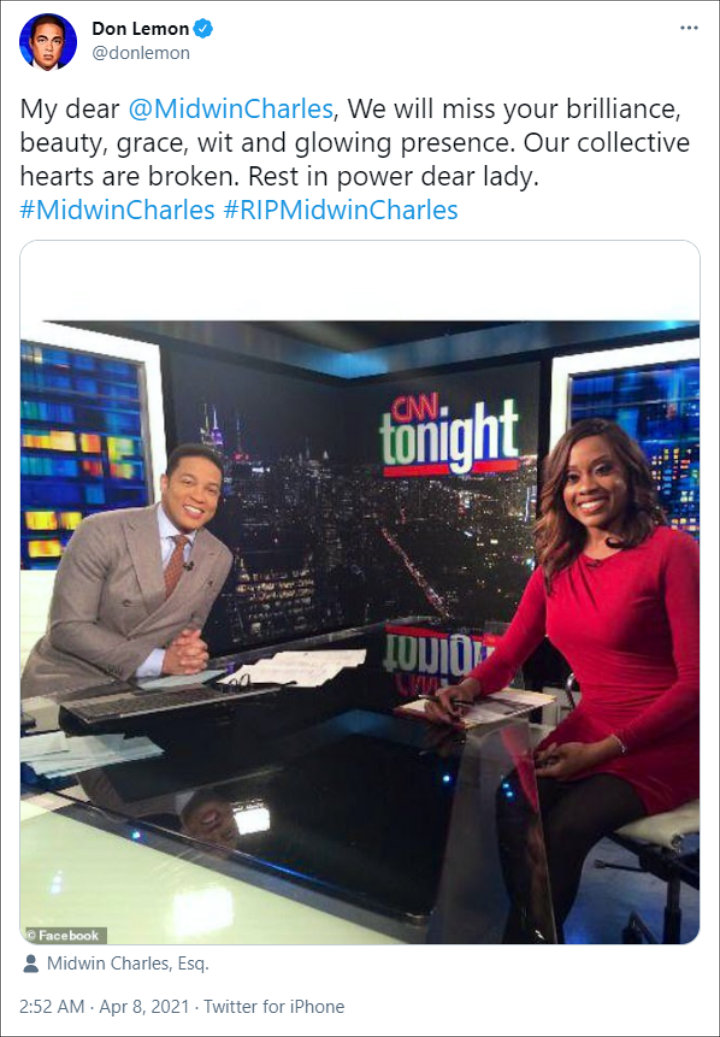 Also paying homage to Midwin was Martin Luther King Jr.‘s daughter, Bernice King. “I’m saddened to learn of the death of Midwin Charles. My heart goes out to those mourning her here and to her family,” the minister tweeted. “From what people are sharing, her life was a light that brightened the way for others. Well-lived.”

Bernice King tweets that she is saddened to learn the death of Midwin Charles.

Former MSNBC legal analyst and current New York City mayoral candidate Maya Wiley mourned the loss by tweeting, “I am DEVASTATED! Midwin Charles is someone I am deeply grateful to for her heart and her head. And she was someone I valued at MSNBC!” She added in the same post, “My heart goes out to her family and we have all lost a Sister. #RIJ” 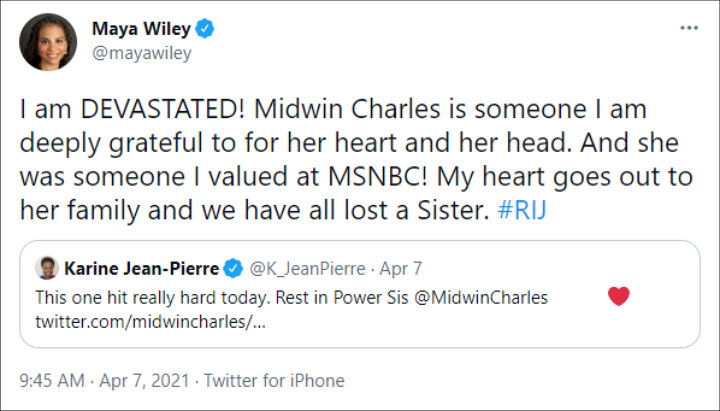 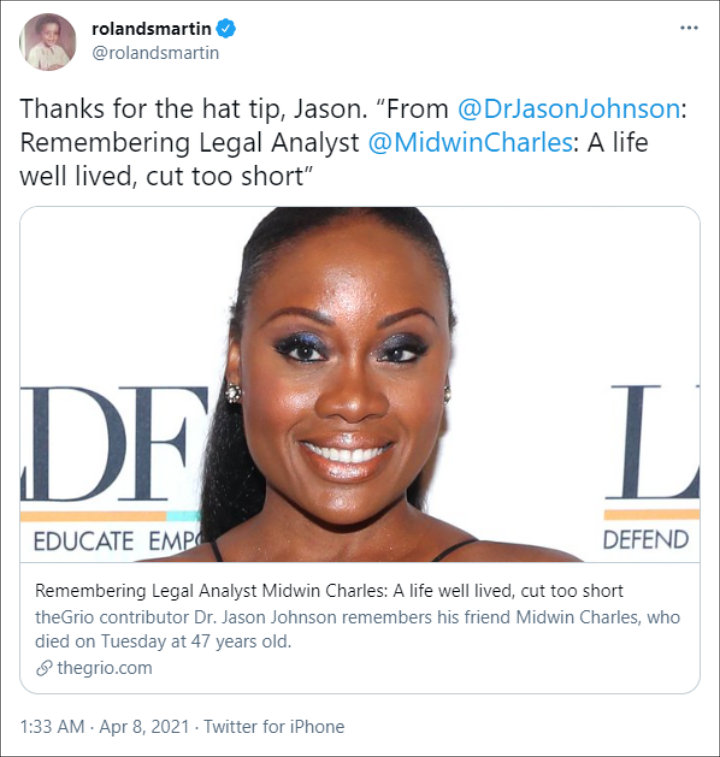 Roland Martin also send his tribute on the social media.

CNN political pundit Sophia A. Nelson also took to Instagram to share her thought. “I’ve been taking some time off for #selfcare and re-ordering my life. The news tonight of @MidwinCharles is just another reminder of how short this life is,” she wrote. “And you better do what you are called to do. Gifted to do. Purposed to do. While you still have the breath of life in you.”

Sophia A. Nelson shares her though following Midwin’s death.


Kehlani Talks About Being Privileged After Coming Out as Lesbian