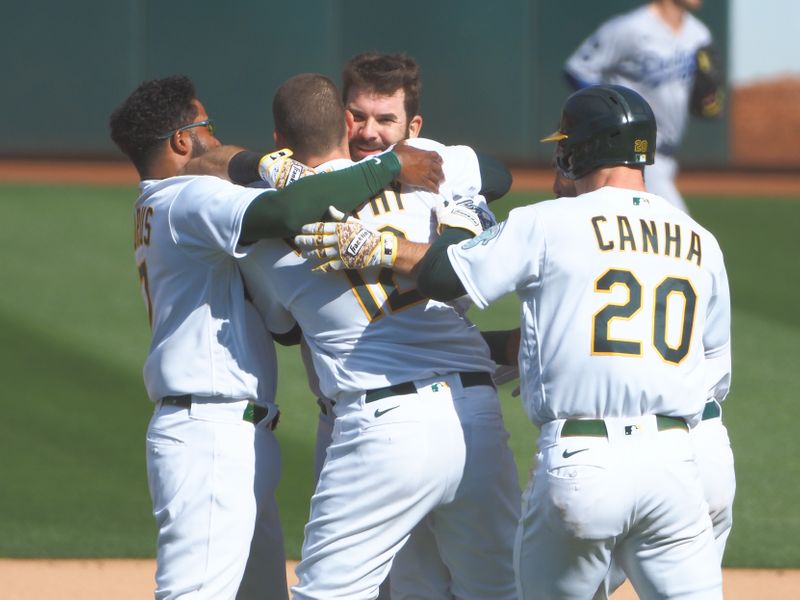 Mitch Moreland lined a walk-off single to center field with one out in the bottom of the 10th inning Wednesday afternoon, allowing the Oakland Athletics to end a historic season-opening losing streak with a 4-3 victory over the visiting Los Angeles Dodgers in the finale of a three-game series.

The A’s overcame a 3-1 deficit and the strong pitching of Trevor Bauer en route to their first win of the year after they had matched the 1916 Philadelphia A’s for the longest season-opening losing streak in franchise history at six games.

Bauer was looking at a second straight win before Elvis Andrus’ sacrifice fly off Los Angeles closer Kenley Jansen scored Matt Chapman with the tying run in the bottom of the ninth. Bauer struck out 10 in 6 2/3 innings. He was charged with two runs on three hits with one walk.

Chapman finished with two hits and Ramon Laureano had two stolen bases for the A’s, who had been outscored 50-13 during their losing streak. Chris Taylor had a double and a single while Corey Seager added two singles for the Dodgers, who out-hit the A’s 8-5.

Ronald Acuna Jr. had three hits and scored twice to help Atlanta to a road win against Washington in the first game of a doubleheader.

Travis d’Arnaud added a two-run double for Atlanta, which won for the first time after losing four straight. Trea Turner hit his second home run in two games and added a double for Washington. Starlin Castro had three hits and drove in three runs.

Josh Tomlin (1-0) pitched two scoreless innings of relief. Will Smith pitched the seventh inning for his first save, allowing an RBI double to Castro before getting Andrew Stevenson to hit into a game-ending double play.

Pablo Sandoval hit a two-run, pinch-hit homer in the top of the seventh inning and visiting Atlanta defeated Washington to sweep a doubleheader.

Sandoval hit a 3-2 fastball from Tanner Rainey (0-1) to center for his second homer of the season — both as a pinch hitter — with two outs. Luke Jackson (1-0) pitched a scoreless sixth, and Sean Newcomb struck out the side in the seventh for his first save as Atlanta won the final two games of the three-game series.

Washington’s Stephen Strasburg pitched six shutout innings in his 2021 debut. The right-hander allowed one hit while striking out eight. He retired the last 10 batters he faced. In 2020, Strasburg pitched just five innings before his season ended and he ultimately underwent surgery for carpal tunnel syndrome.

Philadelphia’s Rhys Hoskins had a solo homer and two doubles for his second career game with three extra-base hits. Bryce Harper added two hits for the Phillies, who won for the fifth time in six games this season. Phillies starter Aaron Nola lasted only four innings largely because he threw 92 pitches.

Jonathan Villar led the Mets with three hits while Brandon Nimmo and Luis Guillorme had two hits each. The Mets went 1-for-12 with runners in scoring position and stranded 14 baserunners. Mets starter David Peterson (0-1) struggled mightily in four-plus innings, giving up seven hits and six runs.

Jack Flaherty (1-0) allowed one hit — a first inning single by leadoff batter Corey Dickerson — and four walks, striking out six in six innings as the Cardinals swept the three-game set. Molina was the series star, producing at least one key RBI in each game. He has seven RBIs in six games this season, including five against Miami.

St. Louis held the Marlins to a combined 15 hits and three runs in the series. Marlins starter Pablo Lopez (0-1) had retired 10 straight batters and was one out away from seven scoreless innings. However, he walked Matt Carpenter and gave up Molina’s first homer of the season, and that ended Lopez’s night.

Alex Dickerson scored on a sacrifice fly by Donovan Solano in the 10th inning to give San Francisco the win at San Diego in the rubber match of a three-game series.

Wil Myers had tied the game 2-2 for San Diego with a two-out homer off Tyler Rogers (NYSE:) in the eighth. The Giants’ Jake McGee (1-0) retired the side in the ninth and got the win. Wandy Peralta, who struck out Jorge Mateo with the tying run at third and one out in the bottom of the 10th, earned his first major league save.

Kyle Seager had three hits, including a tiebreaking three-run double, as host Seattle salvaged the finale of a three-game series by beating Chicago. Right-hander Will Vest (1-0) earned his first major league victory.

Trailing 4-1, the Mariners scored seven times in the bottom of the sixth. White Sox starter Dallas Keuchel left with a 4-1 lead, but he put two runners on base to open the frame. Matt Foster (0-1) replaced him but was unable to get out of the inning, giving up five runs on five hits and a walk.

Tyler Naquin led off the bottom of the first with a home run for the second straight day, Kyle Farmer added a two-run double later in the inning and Cincinnati completed a three-game home demolition of Pittsburgh.

Luis Castillo (1-1), bombed for eight hits and eight earned runs in an Opening Day loss to St. Louis, rebounded with seven shutout innings, limiting the Pirates to four hits. He walked one and struck out five.

Chad Kuhl (0-1), battling his control for the second consecutive start, took the loss. He gave up five runs (four earned) on just two hits but walked five and hit a batter while striking out five.

Tampa Bay starter Ryan Yarbrough pitched 3 1/3 scoreless innings before Xander Bogaerts singled in Rafael Devers to tie the game at 1. Vazquez then gave Boston the lead for good as he plated Devers by driving a 1-2 pitch over the Green Monster for a 3-1 lead.

Boston’s bats were on fire in the fifth with the Sox tacking on six more runs — all with two outs in the inning. Bogaerts finished 3-for-3 and scored twice for the Red Sox, who had 13 hits.

Kenta Maeda gave up two runs in six innings to help lift visiting Minnesota to a victory over Detroit.

Maeda (1-0) struck out six, allowed seven hits and walked just one as the Twins won their second series in two tries. Jorge Polanco had a go-ahead, two-run double for Minnesota in the sixth inning.

Wilson Ramos had a home run for the Tigers, while rookie Akil Baddoo had an RBI triple as Detroit lost for the third time in four games.

Jose Ramirez had a pair of two-run home runs as host Cleveland defeated Kansas City. Ramirez had one extra-base hit and had not driven in a run in his first four games.

Jakob Junis made his first start of the season in what was expected to be a bullpen day for the Royals. He pitched five shutout innings and allowed just one hit. He struck out six and walked two.

Gibson (1-0) allowed no runs, six hits and one walk in six innings as the Rangers won the rubber match of the three-game series after dropping the opener.

Lorenzo Cain blasted a pair of home runs, including a tiebreaking, three-run shot in the top of the 10th inning, to lead Milwaukee over host Chicago.

Cain hit a solo shot in the eighth inning. Christian Yelich went 3-for-4 with a double for the Brewers, who won the rubber match in the series finale.

Joc Pederson hit a solo homer and Jason Heyward had an RBI single in the 10th for the Cubs, who managed only three hits as their struggles continued at the plate. Chicago scored two runs on four hits combined over the final two games of the series.

Designated runner Rio Ruiz scored on a bloop single by pinch hitter Chance Sisco with one out in the 11th inning as Baltimore ended a 12-game road losing streak at New York.

Cedric Mullins and Anthony Santander (MC:) homered in the fourth for the Orioles, who had matched their longest road losing streak to the Yankees going back to their time as the St. Louis Browns through 1953. Baltimore won a road game over the Yankees for the first time since March 31, 2019.

Aaron Hicks drove in New York’s first run in the third with an RBI single off John Means — the last Baltimore winning pitcher in New York. The Yankees’ Jameson Taillon, back from a second Tommy John surgery, allowed two runs on three hits in 4 2/3 innings. It was his first start since May 1, 2019.

Garrett Hampson had two hits, scored three runs and stole three bases for Colorado, which ended a four-game losing streak. The Diamondbacks were held to five hits, four against Senzatela, one night after racking up 10 runs on 13 hits and smacking two home runs.

Senzatela (1-1) bounced back from a rough first start. He needed just 96 pitches to get through eight innings and kept traffic off the bases all night. He struck out three and walked two. Madison Bumgarner (0-1) left after five innings. He allowed five runs on eight hits, walked two and struck out four.

Russia to expel Ukrainian diplomat as tensions simmer By Reuters