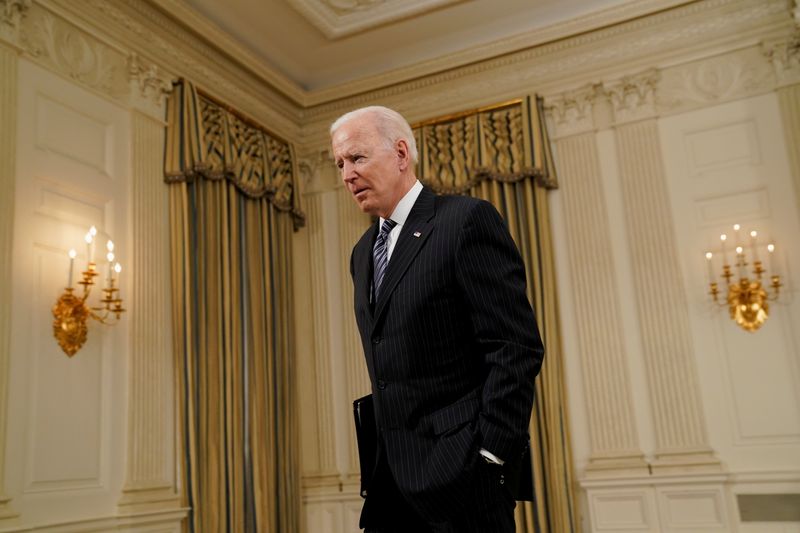 By David Shepardson and Jeff Mason

WASHINGTON (Reuters) -U.S. Senate leaders are preparing to introduce legislation on semiconductors, President Joe Biden said on Wednesday as the nation wrestles with an ongoing shortage of the critical technology used in a range of devices from cars to computers.

“We’re working on that. (Senate Majority Leader) Chuck Schumer and, I think, (Senate Republican Leader Mitch) McConnell are about to introduce a bill along those lines,” Biden said during remarks about his own plan to boost the nation’s infrastructure.

On Monday, a U.S. auto industry group urged the government to help as it warned that the global semiconductor shortage could result in 1.28 million fewer vehicles built this year and disrupt production for another six months. It called for setting aside some money for automotive chip production.

Biden in February ordered several federal agency actions to address the chip crisis, and is seeking $37 billion in funding for legislation to supercharge chip manufacturing in the United States.

Automakers have been hit particularly hard by the global chip shortage after many canceled orders when auto plants were idled during the coronavirus pandemic.

Industry group NCTA – The Internet & Television Association said in comments to the Commerce Department this week that providers are facing chip delays resulting in delays delivering some cable TV boxes as well delays in receiving “network switches, routers, and servers. … Shortages in semiconductors and the associated delays will result in hundreds of millions of dollars in impact to the broadband and cable television industry this year.”

Aircraft maker Boeing (NYSE:) Co said in comments filed with the Commerce Department that “the primary risk to the semiconductor supply chain is the lack of critical domestic manufacturing capability.”