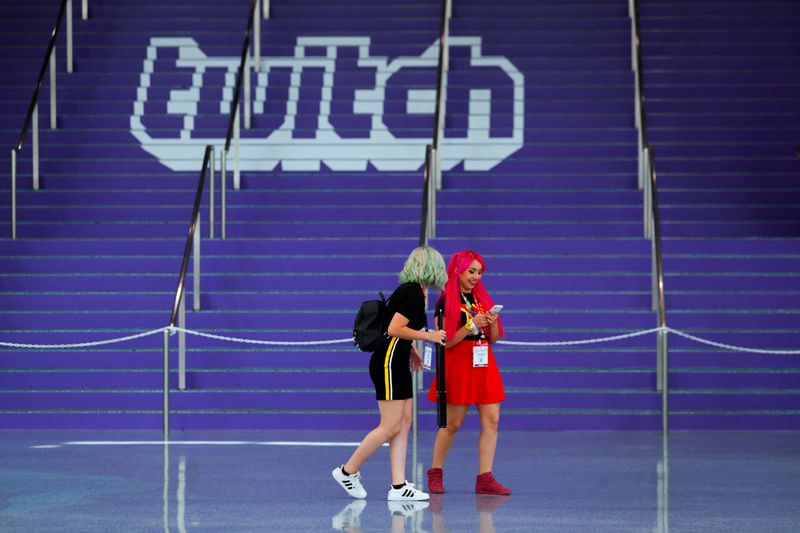 © Reuters. FILE PHOTO: A Twitch logo is displayed at a video games expo

(Reuters) – Live-streaming service Twitch will ban users for offenses such as hate-group membership or credible threats of mass violence that occur entirely away from the site, in a new approach to moderating the platform, the company said on Wednesday.

The Amazon (NASDAQ:) Inc-owned platform, which is popular among video gamers, said under its new rules it would take enforcement actions against offline offenses that posed a “substantial safety risk” to its community.

It said examples of this “severe misconduct” include terrorist activities, child sexual exploitation, violent extremism, credible threats of mass violence, carrying out or deliberately acting as an accomplice to sexual assault and threatening Twitch or its staff.

“Taking action against misconduct that occurs entirely off our service is a novel approach for both Twitch and the industry at large, but it’s one we believe – and hear from you – is crucial to get right,” the company said in a blog post.

Major social media companies Facebook Inc (NASDAQ:) and Twitter Inc (NYSE:) largely focus their rules and enforcement actions on content and activity on the actual services, with exceptions for certain individuals or organizations they have designated as dangerous or violent.

Twitch previously took into account off-service behaviors related to incidents on the site, such as harassment on other social media platforms. It said it had also historically taken action against serious misconduct away from its service, such as when it indefinitely suspended the account of former U.S. President Donald Trump after a mob of his supporters stormed the U.S. Capitol on Jan. 6. Twitch said it did not have a large-scale approach in the past.

The company said users will be able to report such behaviors but it may also investigate cases proactively, for instance if there is a verified news report that a user has been arrested.

Twitch said it would rely more heavily on law enforcement in “off-service” cases and is partnering with an investigative law firm to support its internal team. It declined to name the firm.

The new standards will apply even if the target of the offline behaviors is not a Twitch user or if the perpetrator was not a user when they committed the acts. Perpetrators would also be banned from registering a Twitch account, it said.

Twitch said it would take action only when there was evidence, such as screen shots, videos of off-Twitch behavior or police filings, verified by its internal team or third-party investigators. Users who submit a large amount of frivolous reports will face suspension.

The company said in cases where the behavior happened in the distant past, users had gone through rehabilitation such as time in a correctional facility, and they no longer presented a danger to the community, it might not take action or might reinstate users on appeal.