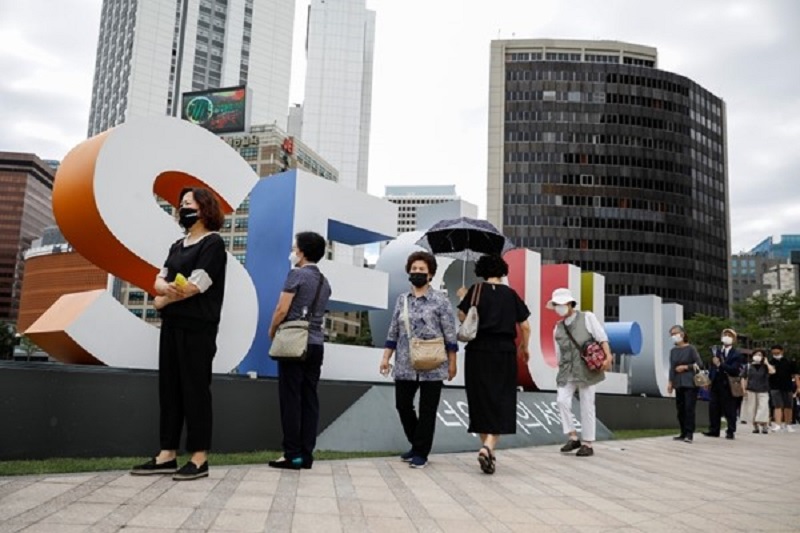 Final results released Thursday showed conservative Oh Se-hoon scored a landslide victory in the race in Seoul over ruling party candidate Park Young-sun, a former minister for startups. Oh picked up 57.5% of the vote to 39.2% for Park. In Busan, Park Hyung-jun of the conservative People Power Party defeated Kim Young-choon from Moon’s ruling party by 62.7% to 34.4%, data from the National Election Commission showed.

A key issue in the races was anger over housing prices in major metropolitan areas that have soared under Moon. The losses in the cities that account for about a quarter of South Korea’s population could slam the brakes on Moon’s agenda to increase public employment and a push for larger fiscal spending. The setbacks could also serve as warning to his Democratic Party that it needs to revamp its policies if it wants to keep the presidency when Moon’s single, five-year term ends in 2022.

“I feel a great sense of responsibility,” Oh, who already served as Seoul mayor between 2006 and 2011, said in a PPP office on Thursday.

Some young voters, who have been a strong support base for Moon, appeared to fleeing his progressive camp. Exit polling showed that more than 70% of male voters younger than 30 cast ballots for Oh.

The results were a stunning reversal for Moon and his allies. They won a supermajority in parliamentary elections about a year ago, riding a wave of public support for their management of the coronavirus crisis. Moon’s party has scored a series of victories in the wake of the 2016 impeachment of former President Park Geun-hye, a conservative leader later convicted of corruption.

Amid the anger over housing and stumbles in virus management, Moon’s support rate hit a new low last week, following allegations employees of a state-run land corporation used insider information to make money for themselves from housing developments in Seoul. The scandal was the latest in a series of questionable land deals that have dogged the Moon presidency.

Oh, backed by the PPP, has been hammering Moon’s government for tightening regulations on redevelopment and limiting the number of building permits over the years, saying the attempt to rein in gains by private constructors have backfired.

Oh resigned as Seoul mayor in 2011 having lost a fight to curb free student lunches in the capital to reduce public spending, stoking criticism of being tight-fisted. A return to power could signal public sentiment has soured toward Moon’s economic policies that prioritize wealth redistribution and fiscal aid.

Moon pledged to make housing more affordable when he was elected in 2017, but apartment prices in Seoul have doubled in the last five years, while salaries have been unable to keep pace, leaving housing in the capital out of reach for many people and some of it in the hands of a speculative few.

Moon has enacted dozens of measures to curb gains, only to see some of them backfire and prices in Seoul surge further during his term. Meanwhile, households owed more money than ever before as they race to purchase homes before prices go even higher. Their debt has now reached about 176% of disposable income.

The by-elections were needed after the mayors in Seoul and Busan, both from Moon’s Democratic Party, faced allegations of sexual harassment, an embarrassment for Moon who has billed himself as a feminist president.

Oil Up 6% on Week, Volatility Could Return By Investing.com