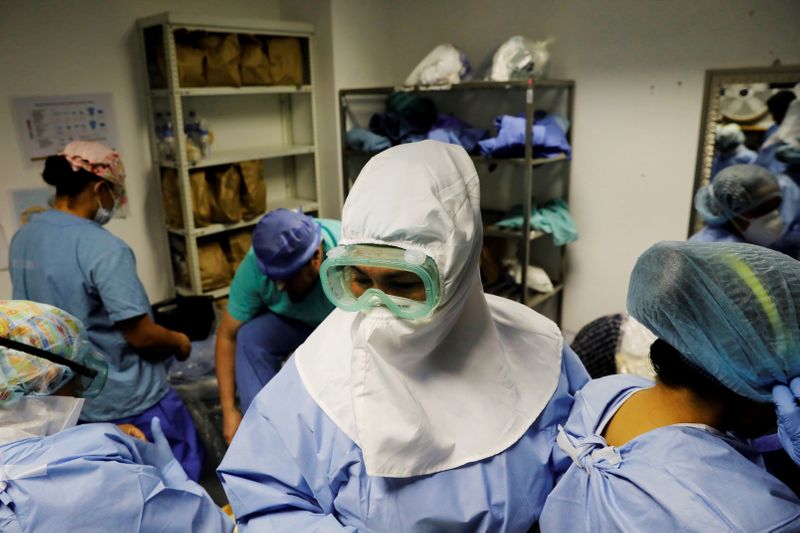 MEXICO CITY (Reuters) – Mexico’s private healthcare personnel are protesting being left out of the government’s COVID-19 vaccine rollout, just as the country braces for a potential third wave of infections.

Angered by what they see as discrimination by a government prioritizing the public sector, hundreds of health workers that had gathered outside a medical school last week hoping to get inoculated ended up chanting “we want the vaccine.”

About 500 of the protesters eventually got their wish that day.

“We realized we weren’t even considered,” said David Berrones, a Mexico City ophthalmologist who last month launched an informal census of medical professionals awaiting a jab.

The government said it did include private front-line healthcare workers in its initial vaccination plans, but that efforts to reach all of them were complicated by unreliable staff registers.

Mexico’s doctors have paid a heavy price in the crisis. At least 3,679 medical staff have died in the pandemic that has so far killed more than 200,000 people in Mexico, according to the latest official data. The toll is the highest worldwide for health workers, according to Amnesty International.

The government has warned that a new spike in infections could follow the recent Easter holidays.

Berrones and other frustrated medical professionals argue that Mexico’s leftist government prioritized public sector workers. While Mexico’s official figures suggest many thousands of healthcare workers are still awaiting vaccinations, the data does not distinguish between public and private sectors.

Mexico had 964,000 healthcare personnel working in the public sector as of 2019, according to government figures.

Reuters was unable to establish how many private sector health workers there are in Mexico. Berrones said more than 28,700 medical and dental staff had signed his census since March 11, including some from the public sector.

More than 877,500 healthcare workers had received at least one vaccine dose by April 7, according to government data, with no breakdown between public or private.

Mexico has so far administered nearly 9.7 million vaccine doses across the country. Senior citizens and teachers have also been prioritized.

Asked how many private sector healthcare staff had been vaccinated, Deputy Health Minister Hugo Lopez-Gatell, Mexico’s coronavirus czar, said this week that the government was protecting all healthcare workers who needed protecting.

Efforts to identify medical professionals most at risk of infection had been complicated by “inflated” staff lists from the private sector, Lopez-Gatell said.

Mexico’s health ministry did not respond to requests for comment.

One Mexico City gynecologist said he and colleagues at a small private hospital are still unvaccinated despite also having to work in a public hospital under a compulsory social program.

“As soon as you can buy the vaccine in the United States, I’m going to go,” he told Reuters on condition of anonymity for fear it could cost him his job.

More than 40 doctors at his hospital signed a letter, dated March 19 and seen by Reuters, demanding vaccines. But they have not been forthcoming, he said.

Meanwhile, Mexico’s National Academy of Medicine has urged the government to take all doctors into account “considering them as a group vulnerable to contracting the disease,” in a letter dated March 12 posted on its website.

“It’s like going to war,” the gynecologist said. “Who are the people you are going to give guns to first? Soldiers, right?”

Putting their $580,000 in cash to work is key to this Alberta couple’s retirement