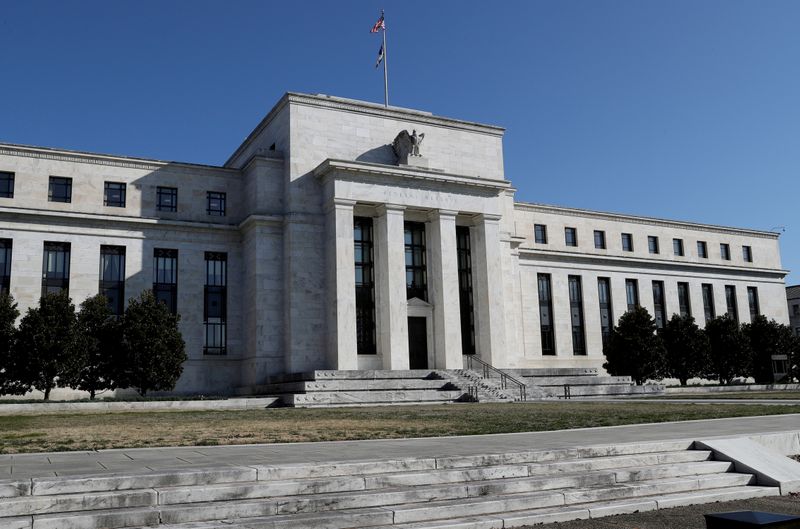 
WASHINGTON (Reuters) – Last month’s U.S. Federal Reserve meeting showed policymakers were universally optimistic in their overall economic outlook, but divisions among them over how much longer to keep massive central bank support in place were on display Wednesday.

Chicago Fed President Charles Evans, who agrees with the majority of his colleagues that interest rates will likely need to say near-zero through 2023, said he envisions an uncomfortable period of higher inflation this year, but that the Fed shouldn’t budge until it’s sure that prices won’t just fall back again below the Fed’s 2% inflation goal.

“We really have to be patient and be willing to be bolder than most conservative central bankers would choose to be,” he told reporters.

Once the pandemic has receded, he said, the Fed should pare its bond buying and move toward raising rates in 2022, and signaled he may even be open to doing both at once.

“My thought is the tapering would come first,” Kaplan said in a virtual discussion organized by UBS. “I think in my mind it would be substantially completed before you dealt with Fed funds rate, but I would like to retain flexibility on that.”

Those dueling visions of how the Fed ought to react as the latest pandemic relief package and accelerating vaccinations propel what is projected to be the fastest-growing U.S. economy in 40 years could come into sharper focus later Wednesday, when a detailed account of policymakers’ discussions during their most recent policy-setting meeting is released.

At that March meeting, the Fed made no changes to its near zero target interest rate or the $120 billion pace of monthly bond buying, and also did not change its standing pledge to keep all of that in place until the economy is recovered from the lost jobs and other financial damage done by the pandemic and the sharp associated recession.

But Fed officials did boost their outlook for the economy by a significant margin as they surveyed progress on the vaccines and the trillions of dollars in newly committed federal spending and concluded the economy was primed.

The median Fed policymaker projection for economic growth in 2021 was increased from 4.2% as of December to 6.5%, which would if achieved be the fastest rate of expansion since 1984.

Even with its policies unchanged, the outcome of the meeting suggested an evolving debate among policymakers about just how quickly recovery may occur, with four officials, including Dallas Fed’s Kaplan, projecting a rate increase may be appropriate as early as next year.

That is much faster than the core of officials who don’t expect rates will need to rise until at least 2024, and the minutes could shed light on the nature of the disagreement – whether it is just a matter of differing economic forecasts, for example, or whether some officials are becoming hesitant about the Fed’s effort to court higher inflation or see other risks rising that may require a central bank response.

A shift in Fed strategy last year saw the Fed put a higher premium on encouraging employment, and saying it wanted inflation to run above its formal 2% target “for some time” in order to offset years when the pace of price increases was too weak.

That new framework was adopted unanimously. But the shift of several policymakers’ views prompted some second guessing about whether the commitment is as deep as presented.