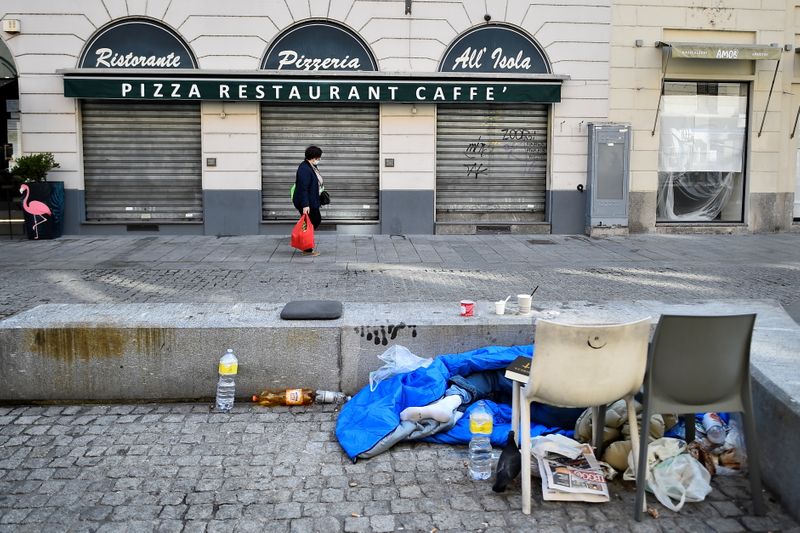 ROME (Reuters) – Italy will further tighten coronavirus restrictions in three of its 20 regions, the government said on Friday, after health officials warned of the growing spread of new, highly contagious variants.

Earlier, the health ministry announced 24,036 new daily cases of coronavirus, up from 22,865 the day before. Over the last five days, new infections have increased by 23% by comparison with the same period last week.

“The virus is spreading rapidly across Italy,” said Silvio Brusaferro, chief of the Superior Health Institute (ISS). He said a highly contagious variant first discovered in Britain was now prevalent.

Italy’s average reproduction number has risen to 1.06 – the first time it has moved above the threshold of 1 after seven weeks, the ISS said. An “R” number above 1 indicates infections will grow at an exponential rate.

Italy has established a four-tier colour-coded system (white, yellow, orange and red) with curbs calibrated according to the infection levels and revised every week.

Campania, centred on the southern city of Naples, will join Basilicata and Molise in the strictest red zone as of Monday. Movement will be severely limited, and bars, restaurants and schools closed along with most shops.

Two northern regions will move from the yellow to the intermediary orange list – Friuli Venezia Giulia and Veneto. That brings the total number of orange regions to 10, with just six marked yellow and one white – Sardinia.

In orange zones, restaurants and bars are closed except for takeaways and people are not allowed to leave their towns except for emergencies, work and health reasons. Some areas, such as Lombardy, centred on the financial capital Milan, have additionally decided to shut schools as a precaution.

The country has so far registered 99,271 deaths linked to COVID-19, the second-highest toll in Europe after Britain.

However, data released on Friday suggested the toll might be higher still.

Statistics bureau ISTAT said there were 100,525 excess deaths in Italy last year compared with the average for 2015-2019. According to official data, there were 75,891 deaths linked to coronavirus in 2020.