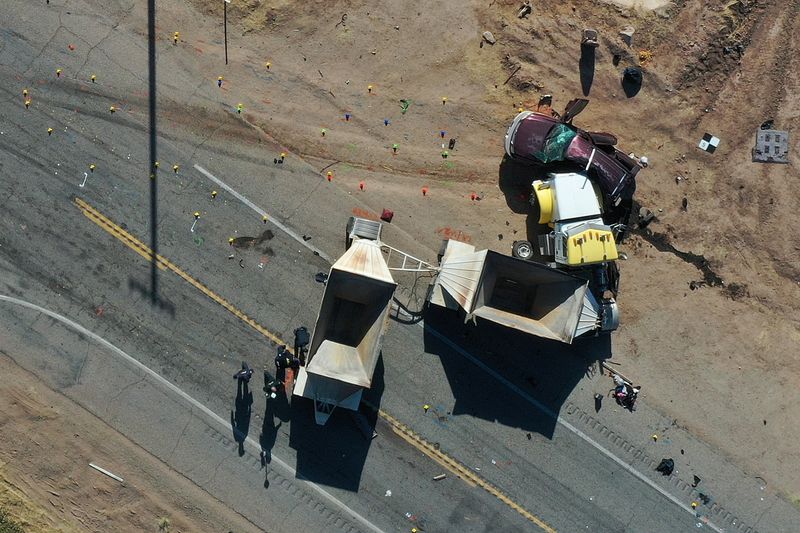 © Reuters. CHP officers investigate after a collision between an SUV and a tractor trailer truck near Holtville

LOS ANGELES (Reuters) – The 13 people killed in a Southern California highway crash were part of a group of nearly four dozen migrants suspected of slipping through a hole cut by human smugglers through a steel fence along the U.S.-Mexico border, federal officials said on Wednesday.

Besides the dead and injured among 25 people crammed into the sport utility vehicle that collided on Tuesday with a tractor-trailer, 19 others were found huddled near a second SUV that caught fire in the same area just north of the border, the officials said.

The 19 were detained by U.S. Customs and Border Protection (CBP) agents, CBP spokesman Macario Mora said. The dozen survivors from the collision were all taken to hospitals for treatment.

Both the Ford Expedition involved in the crash and the Chevrolet Suburban that inexplicably burst into flames appeared to be the same vehicles seen in surveillance footage leaving the vicinity of the fence breach about 30 miles (48 km) to the east, Mora said.

While Border Patrol agents regularly scout the area for illegal crossings, neither vehicle had been under pursuit by U.S. authorities beforehand, according to the agency.

New details of Tuesday’s fatal highway wreck near the remote farming community of Holtville, about 10 miles (16 km) north of the border, came to light as the CBP mounted an investigation into the suspected human smuggling operation believed to have led to the tragedy.

“Human smugglers have proven time and again they have little regard for human life,” the agency said in a statement.

Of the 13 people who died in the collision, at least 10 were Mexican nationals, and Mexicans were also among the injured, according to Mexico’s foreign ministry.

Guatemalan authorities said they had preliminary information that one Guatemalan national died and another was injured in the crash.

Mora said investigators believe that both carloads of migrants crossed into California through a 10-foot-wide gap cut out of the border fence by smugglers in an area known for relatively frequent illegal border crossings.

That section of the fence, consisting of steel bars 18 feet tall, was installed in 2009, some eight years before the Trump administration took office calling for a border wall.