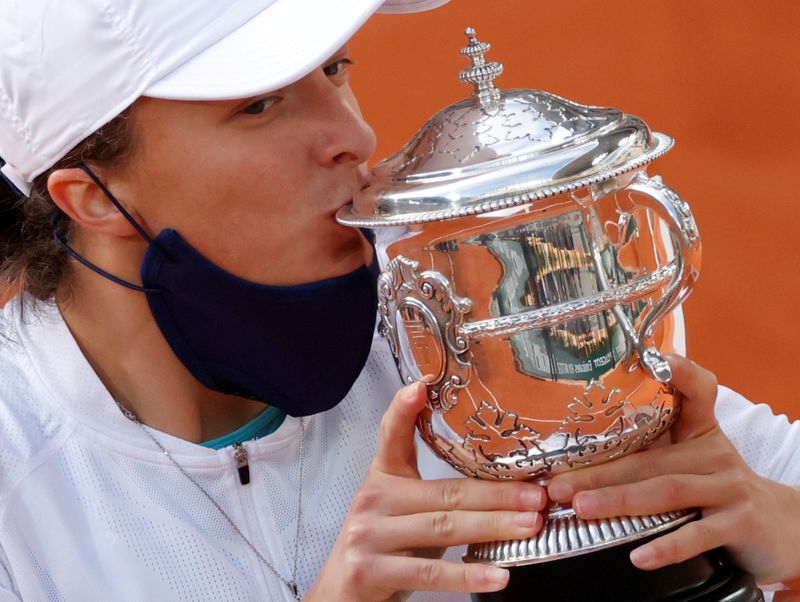 WARSAW (Reuters) – The success of Poland’s Iga Swiatek has helped bring a WTA women’s tournament back to the country’s coast after an absence of more than 10 years and local fans will get the chance to see her play, the organisers said on Monday.

The 19-year-old was also the youngest woman to win the title since Monica Seles in 1992, the first Polish woman to reach the Roland Garros final in 81 years and the first at any major since Agnieszka Radwanska at Wimbledon in 2012.

“For sure Iga’s result inspired us and helped (us) to organise this tournament. Such ideas have been around for a long time, but it was quite hard to put many things together…,” Iga’s father Tomasz, CEO of the tournament’s organisers Tennis Consulting, told Reuters.

The event will take place from July 17-25 in Gdynia, northern Poland, with the total prize pool of $235,000, the organisers said.

Poland has eased some novel coronavirus-related restrictions nationwide, opening ski slopes as well as cinemas, hotels and theatres up to 50% capacity, but authorities say the measures may have to be rolled back as cases rise again.

“We take this (possible restrictions) into account and of course it may happen, for example, that supporters will not be allowed to take seats in tribunes… the tournament will be broadcast so I hope this would compensate for the (potential) absence of fans,” Tomasz Swiatek added.

On Saturday, Iga Swiatek breezed past Swiss second seed Belinda Bencic 6-2 6-2 in the Adelaide International final to claim the second title of her career.