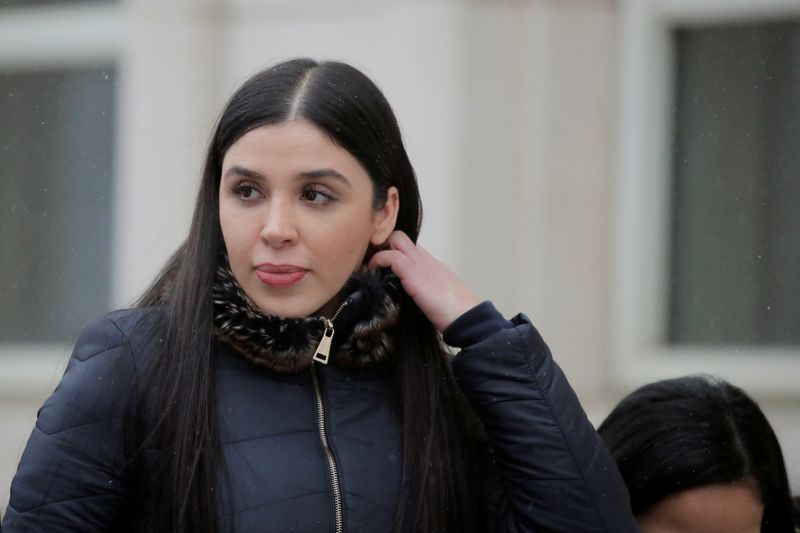 © Reuters. Emma Coronel Aispuro, the wife of Joaquin Guzman, departs after the trial of Mexican drug lord Guzman, known as “El Chapo”, at the Brooklyn Federal Courthouse, in New York

WASHINGTON (Reuters) – Emma Coronel Aispuro, the wife of Mexican drug cartel kingpin Joaquin “El Chapo” Guzman, made her initial appearance in a federal court in Washington on Tuesday, after being charged with helping her husband run his drug empire.

Coronel, 31, a former beauty queen, was arrested at the Dulles International Airport on Monday.

Authorities said Coronel relayed messages to help Guzman conduct drug trafficking from 2012 to early 2014, and continued delivering messages while visiting him in a Mexican prison following his February 2014 arrest.

They also said Coronel conspired in Guzman’s famous July 2015 escape from the Altiplano prison in Mexico through a mile-long tunnel dug from his cell, and began plotting another escape following his January 2016 capture by Mexican authorities.

Guzman, 63, was convicted in February 2019 in a high-profile Brooklyn trial of masterminding a multibillion dollar drug enterprise for his drug operation, the Sinaloa cartel.

He was sentenced to life in prison plus 30 years, and locked up in the federal Supermax prison in Florence, Colorado.

Japan stocks higher at close of trade; Nikkei 225 up 0.99% By Investing.com

Clooney, Roberts join an all-star Hollywood cast Down Under By Reuters

Pentagon Crafting Next Budget Close to This Year’s $704 Billion