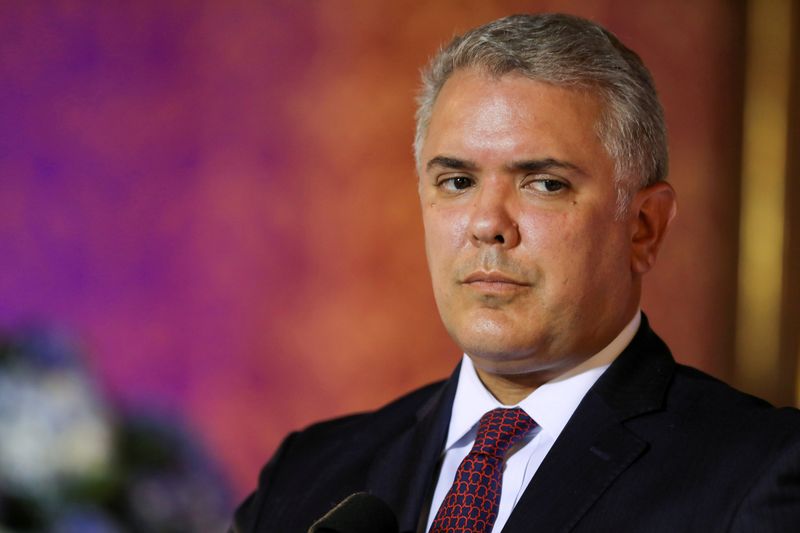 © Reuters. FILE PHOTO: Colombia’s President Ivan Duque looks on during the announcement of the granting of legal status of temporary protection to Venezuelan migrants, in Bogota

The murders of activists and mass killings have made President Ivan Duque the target of frequent criticism by the international community and advocacy groups. His government largely blames the violence on drug trafficking.

The UN’s Office of the High Commissioner for Human Rights tallied 133 murders of activists and community leaders last year, up 25 from the year before. The government said on Monday it had recorded just 66, but that 63 others were being investigated.

The full implementation of a 2016 peace deal with the Revolutionary Armed Forces of Colombia (FARC) rebels, which initially led to a reduction in violence, is key to stemming the violence, the UN body said.

“The most important thing is to put the peace deal in the center of the government’s response, reinforcing the mechanisms created by the deal” for this situation, Juliette de Rivero, the U.N. office’s Colombia representative, said in a virtual press conference.

The Colombian government was not immediately available for comment on Tuesday.

The 2016 accord saw some 13,000 FARC members demobilize and the group become a legal political party.

The government must also dismantle armed groups including the still-active ELN rebels, former FARC fighters who reject the peace deal and crime gangs run by ex-paramilitaries, which are responsible for killing activists who resist them.

The murders of at least 248 FARC ex-combatants since the accord was signed is due to “an absence of comprehensive state presence” in some regions, de Rivero said.

Before the commission’s mandate expires in November, all of Colombian society, including the military, should contribute to efforts by a truth commission created under the deal to clarify events which took place during the half-century conflict.

Clooney, Roberts join an all-star Hollywood cast Down Under By Reuters

Pentagon Crafting Next Budget Close to This Year’s $704 Billion