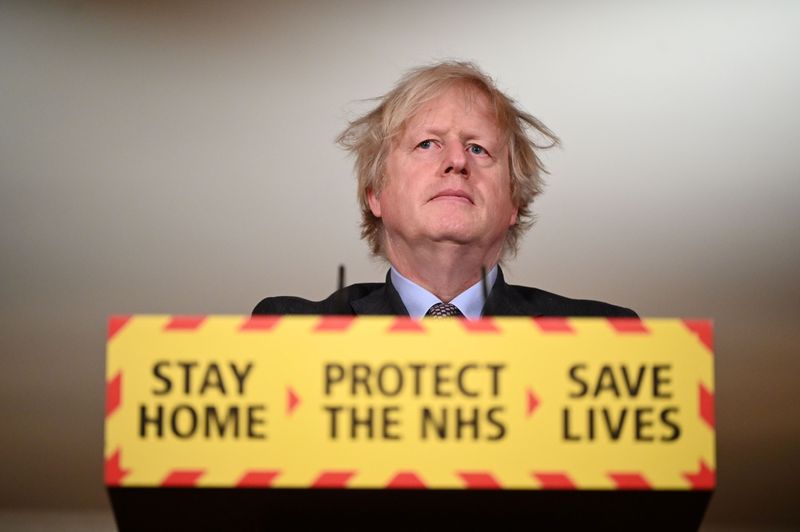 
LONDON (Reuters) – British Prime Minister Boris Johnson said on Tuesday that he was very optimistic that all COVID-19 restrictions in England would end on June 21, and added that the government would hold a review into the use of vaccine certificates.

Johnson unveiled a map out of lockdown for England on Monday that would keep some businesses shuttered until the summer, saying caution was necessary to ensure there were no reversals on a “one-way road to freedom”.

“I’m hopeful, but obviously nothing can be guaranteed … I’m very optimistic that we’ll be able to get there,” Johnson told broadcasters when asked about the June 21 date earmarked to end restrictions.

With almost 130,000 fatalities, Britain has suffered the world’s fifth-highest official death toll from the pandemic and its economy has seen its biggest crash in more than 300 years.

But in two months it has already managed to provide an initial vaccine dose to more than a quarter of the population, the fastest rollout of any big country, making it a test case for governments worldwide hoping to return life to normal.

Some in Johnson’s Conservative party have questioned whether the timetable for re-opening could have been quicker, given the success thus far of Britain’s vaccine rollout.

“We’re all absolutely determined to come out of this as fast as safely possible, but no faster,” Hancock said on Sky News.

The roadmap suggests that restrictions on nightclubs and large events will be the last to be lifted on June 21, though the government has stressed that the reopening will be led by data, not dates.

Johnson also said senior minister Michael Gove would lead a review to thrash out the “scientific, moral, philosophical, ethical” question of vaccine certificates for those who have received a coronavirus shot, which could facilitate the re-opening of entertainment and hospitality venues.

“There are deep and complex issues that we need to explore, ethical issues about what the role is for government in mandating all people to have such a thing,” he said.

“We can’t be discriminatory against people who, for whatever reason, can’t have the vaccine. There might be medical reasons why people can’t have a vaccine … some people may genuinely refuse to have one.”

U.S. and EU agree to suspend tariffs amid hopes of a...