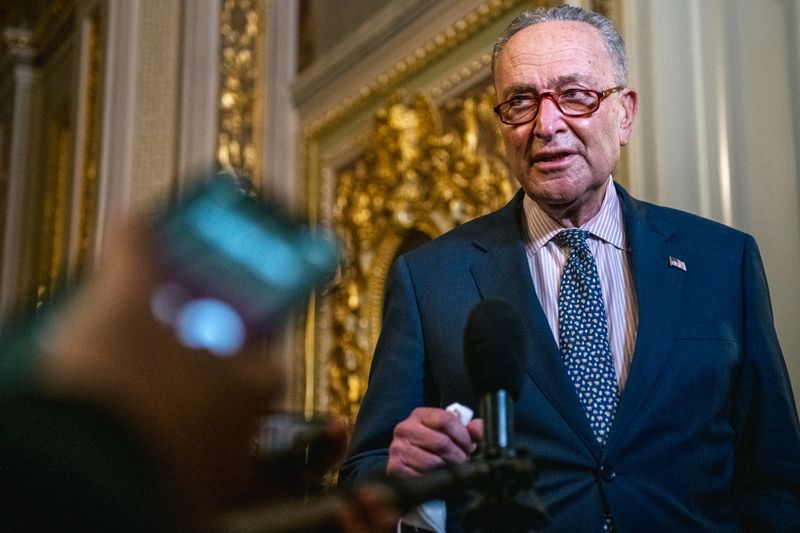 
By Richard Cowan and Alexandra Alper

Schumer said at a weekly press conference that he has directed committees to craft a bipartisan bill based on legislation he proposed last year seeking funding of $100 billion to spur research in key tech areas, from artificial intelligence to quantum computing and semiconductors.

This year’s package would target investment in U.S. manufacturing, science and technology, supply chains and semiconductors, Schumer said, adding he intends to have a bill on the Senate floor by “this spring”.

“Today on our caucus call I directed the chairs and members of our relevant committees to start drafting a legislative package to out-compete China and create new American jobs,” Schumer said at the press conference.

As part of the package, senators are also looking at providing emergency funding to implement bipartisan semiconductor programs included in last year’s National Defense Authorization Act, which sets overall U.S. military spending and the Pentagon policies backed up by that spending.

“I want this bill to address America’s short-term and long-term plan to protect our semiconductor supply chain and keep us No. 1 in AI (artificial intelligence), 5G (next generation communications network), quantum computing, biomedical research, storage, all of these things are part of the bill,” Schumer said.

The legislative drive comes as Republican China hawks have stepped up pressure on Democratic President Joe Biden to stick to his Republican predecessor Donald Trump’s hardline policies on Beijing.

The Biden administration has said it is conducting a review of China programs and promised a tough but more multilateral approach to Beijing.

The announcement also comes as some U.S. automakers have slowed production due to a shortage of semiconductor chips, scarce in part due to a pandemic-era boom in consumer appetite for more cell phones and computers.

Under the prior legislation that the bill would be modeled on, the $100 billion in funding would be funneled over 5 years through a new technology directorate to be installed at the National Science Foundation. Under that proposal, an additional $10 billion would be set aside for technology hubs.

A bipartisan group of U.S. lawmakers plans to meet with Biden at the White House on Wednesday to discuss supply chain issues, including semiconductor chips, Reuters reported.

YouTube will lift ban on Trump channel when risk of violence decreases: CEO By Reuters