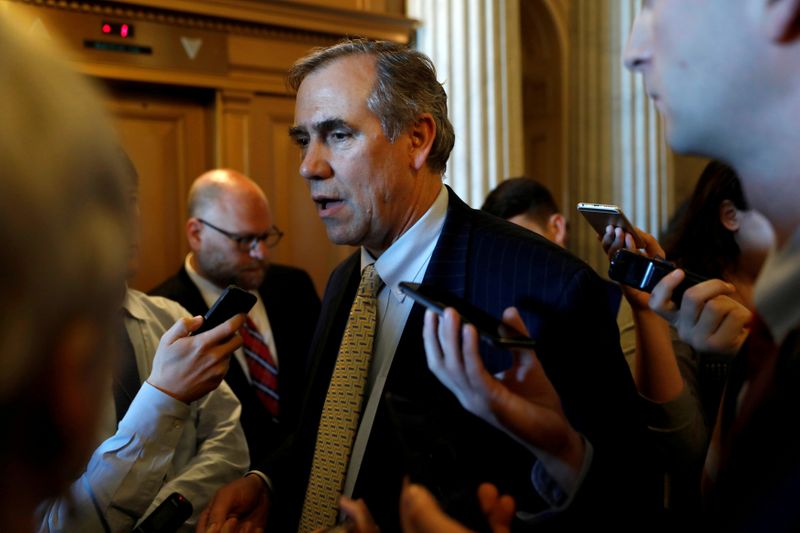 WASHINGTON (Reuters) – A bipartisan group of U.S. senators will revive legislation as soon as Wednesday to counter Chinese censorship in the United States, a new effort by Congress to hold Beijing accountable for its growing efforts to stifle criticism beyond its borders, Senator Jeff Merkley told Reuters.

U.S. officials have complained that the Chinese government has increasingly sought to suppress opposition to its ruling Communist Party by coercing U.S. companies – from hotel chains and airlines to Hollywood film producers – to take pro-Beijing stances.

“We must monitor and address the impacts of China’s censorship and intimidation of Americans and our companies, so we can create a strategy to safeguard this bedrock freedom and hold those accountable who suppress and destroy it,” Merkley, a Democrat leading the effort who will soon be chair of the Congressional-Executive Commission on China, said in emailed comments.

The bill is co-sponsored by Republicans Marco Rubio and John Cornyn, as well as Democrat Elizabeth Warren. A similar bill was introduced in 2019, but stalled.

The new censorship bill would direct the president to set up an interagency task force under the National Security Council to monitor and address China’s censorship or intimidation of Americans and U.S. companies.

It would mandate a report with recommendations for “industries in which freedom of expression issues are particularly acute, including the media and film industries,” according to a copy of the proposed legislation seen by Reuters.

The censorship bill is among a barrage of legislation to confront China, as deeply divided Democrats and Republicans in Congress find common ground opposing Beijing. U.S. Senate Majority Leader Chuck Schumer said on Tuesday he had directed lawmakers to craft a package of measures to counter China’s rise.

National Basketball Association games were taken off the air in China for a year in 2019 following a tweet from a Houston Rockets manager backing Hong Kong democracy protests.

In 2018, the Chinese government compelled global airlines and hotel chains to change their online references to Taiwan to imply the self-ruled democratic island is part of China.

A Democratic Senate aide involved with the bill said drafters recognized it was a sensitive issue for companies, and did not want to make bad guys out of “victims of economic coercion.”

“We want to help provide focus in the U.S. government to address this problem,” the aide said. “In a certain sense, we are trying to help insulate companies from pressure rather than raise the temperature further.”

Some in Congress argue that a task-force approach is not sufficient and call for a stronger response, such as making it easier for U.S. employees to sue if fired based on pressure from China, or requiring U.S. universities to disclose financial ties to Confucius Institutes, which are Chinese government-backed cultural centers.

American allies have also warned of Chinese censorship playing out at home. Germany said on Tuesday that China had tried to intimidate Hong Kong residents living in the country since pro-democracy protests broke out in the city two years ago.

President Joe Biden, who has voiced concern about China’s “coercive and unfair” trade practices, and endorsed a Trump administration determination that China has committed genocide in its Xinjiang region, has signaled his administration will maintain pressure on Beijing.

Alabama extends mask mandate for a month, breaking with Texas, Mississippi By Reuters