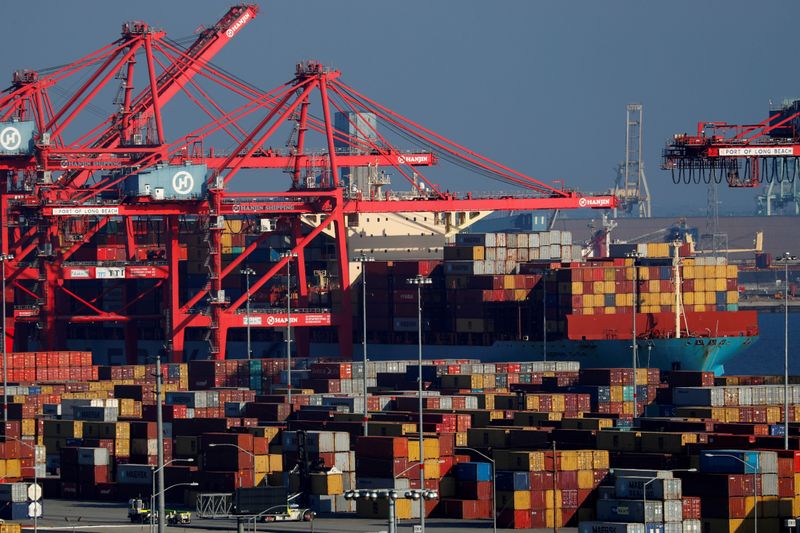 © Reuters. FILE PHOTO: Ships and shipping containers are pictured at the port of Long Beach in Long Beach, California

(Reuters) – As Home Depot (NYSE:) heads into its busy spring project season – when shoppers build backyard decks and buy patio furniture – it is tangling with surging costs for goods and transportation, on top of tariffs that cost it and other U.S. importers billions of dollars.

Across the United States, major retailers and makers of everything from Peloton spin bikes and La-Z-Boy recliners to Kia Sorrento SUVs are battling the same profit-squeezing pressures. They pass those costs along to home-bound consumers, who are snapping up expensive-to-ship items like appliances, furniture and exercise equipment.

“As I think about all that’s going on now, I reflect back to the tariffs and… long for (when) that was our biggest issue,” Home Depot President Edward Decker said on a webcast on Tuesday.

Retailers like Home Depot, Walmart (NYSE:) and Amazon.com (NASDAQ:) got a boost when shoppers redirected travel and entertainment spending due to the COVID-19 pandemic. Now they must quickly replenish supplies to sate consumer demand.

Like other U.S. importers, they are rushing in products from China, Vietnam and other Asian countries – swamping U.S. seaports and spawning delays and disruptions that ripple across the globe.

Home Depot struggled to keep enough products on shelves during the fourth quarter, when strong sales required it to bring in more inventory than a year earlier. [L4N2KT2F3]

Home Depot executives said consumer prices for construction supplies like lumber and products are up due to commodity cost spikes. “A stick of lumber that was 2-odd dollars is now over $5,” Decker said.

At the same time, major appliance prices are on a steep climb, with laundry equipment up more than 23% in January versus a year ago, according to the Bureau of Labor Statistics’ Consumer Price Index.

U.S. sea-borne imports hit $6.4 billion in January, up 159% from a year earlier, according to S&P Global (NYSE:) Market Intelligence’s Panjiva unit and S&P Global Platts. That was on top of a similar increase in the fourth quarter.

In recent weeks, the cost of transporting goods from Asia to the U.S. West Coast rose a whopping 200% year-over-year, while rates to the East Coast have more than doubled, data from S&P Global Platts Containers shows.

Port and container shipping executives say the bottlenecks may not dissipate until the second or early third quarter of this year.

Peloton Interactive (NASDAQ:) plans to spend $100 million to expedite deliveries of spin bikes and other equipment. That will require pricier air shipping and expedited ocean freight services, as well as the cost of routing cargo containers away from the Los Angeles/Long Beach port complex – which is suffering record backups. [L1N2KN30A]

“It feels like whack-a-mole. You figure out one (supply chain issue), get it fixed – and another piece comes up,” said Lifetime Products CEO Richard Hendrickson, whose Utah-based sporting goods company imports some items from China.