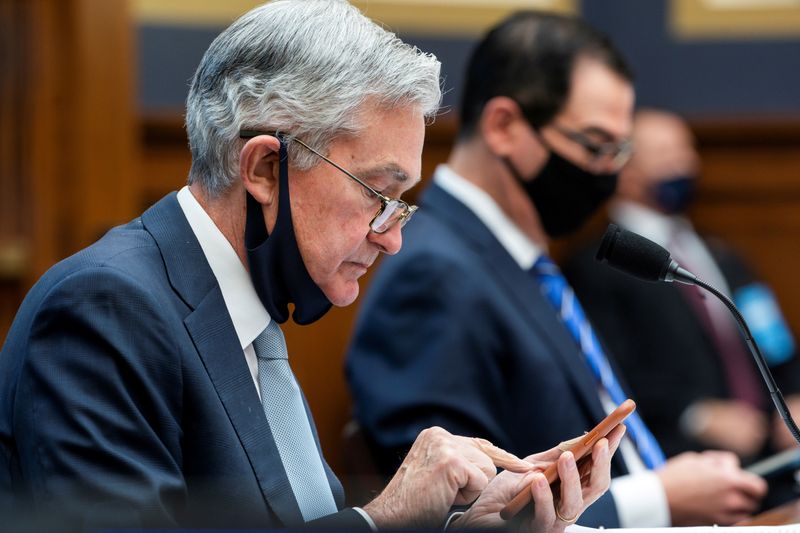 © Reuters. FILE PHOTO: Fed’s Powell is pictured preparing to speak before a House committee in December

WASHINGTON (Reuters) – In a congressional hearing dominated by talk of the pandemic and what may be needed to heal the economy from its effects, Fed Chair Jerome Powell on Tuesday had a subtle message for U.S. senators evaluating their options.

Toss out the college textbooks, because the world has changed.

The unemployment rate? Forget it. The Fed only cares about the number of people working and how to get it higher, not an age-old statistic that, for all its familiarity, overlooks a key group, namely those who stopped looking for work during the pandemic and need to be brought back.

Inflation? Not a problem anytime soon. Queried by Democratic U.S. Senator Mark Warner about the need to make “a sizeable investment” in U.S. infrastructure, Powell set aside classic concerns of hefty government borrowing driving up prices and responded “this is not a problem for this time as near as I can figure.”

The money supply? No longer relevant, Powell, 68, told Republican U.S. Senator John Kennedy, 69, about the once-important measures of cash and easily spent assets that was a central focus for the Fed in the past.

“When you and I studied economics a million years ago M2 and monetary aggregates seemed to have a relationship to economic growth,” Powell said, referring to one main measure of the money in public hands. “Right now … M2 … does not really have important implications. It is something we have to unlearn I guess.”

There has been a lot of unlearning these days at the Fed and the economic academy, on everything from basic economic relationships to the hazards – or not – of mountainous government debt. Even before the pandemic the central bank was reassessing one of its core ideas – that when the unemployment rate was low, inflation would be high, and vice versa.

The idea led past central bankers to worry whenever the jobless rate fell below a certain point, and to start itching for rate increases that would slow the economy and fend off the coming inflation. It also put people out of work.

That concept was pretty much thrown overboard as of August: Whatever drives inflation, the Fed concluded – and there is plenty of disagreement about what that is – a low unemployment rate is no longer considered part of it.

The unemployment rate itself may even have become passe. It measures the number of people working divided by the number of people working or looking for work. What it does not count, though, are the people out of the labor market – retirees, for example, but also, and of more concern, women who abandoned careers to care for family during the pandemic.

When the Fed considers its goal of maximum employment these days, Powell said, “we don’t just mean the unemployment rate, we mean the employment rate,” measured against the population as a whole and aspiring to “high levels of participation.”