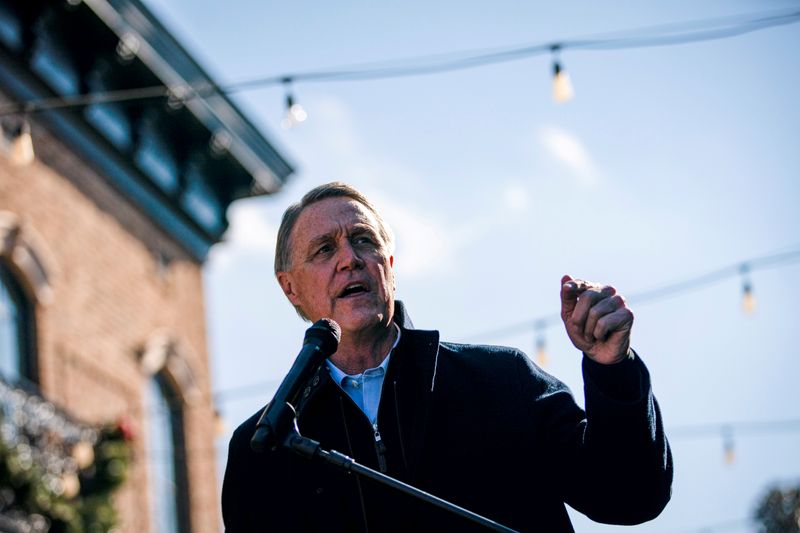 © Reuters. FILE PHOTO: Senator David Perdue (R-GA) speaks during a campaign event as he runs for reelection at the Olde Blind Dog Irish Pub, in Milton

The 71-year-old former businessman ruled out a comeback only a week after he filed a statement of candidacy with the Federal Election Commission and said he was considering another run for the Senate.

“This is a personal decision, not a political one,” Perdue said in a statement on Twitter. “I am confident that whoever wins the Republican primary next year will defeat the Democratic candidate in the general election for this seat.”

Perdue lost to Democratic Senator Jon Ossoff on the same day that fellow Georgia Republican Senator Kelly Loeffler was defeated by Warnock, allowing Democrats to take control of the Senate for the first time since 2015.

The 2020 campaign in Georgia also saw the election of hard-right Republican Representative Marjorie Taylor Greene, who had espoused the QAnon conspiracy theory.

On Tuesday, Perdue dismissed Democratic victories as anomalies, saying: “Georgia is not a blue state. The more Georgians that vote, the better Republicans do.”

Warnock’s special election victory over Loeffler allowed him to fill the remainder of former Republican Senator Johnny Isakson’s term, requiring him to face reelection in 2022. Ossoff won a full six-year term by ousting Perdue, who had been elected to the Senate in 2014.

Loeffler is considering a 2022 rematch with Warnock. So is former Republican Representative Doug Collins, who also ran for the senate in Georgia’s November election that preceded the final January showdown between Warnock and Loeffler.

“I am prepared to defeat whatever Republican they come up with,” Warnock told reporters at the U.S. Capitol.

There’s Only One Power Regulator Left in Texas After Crisis