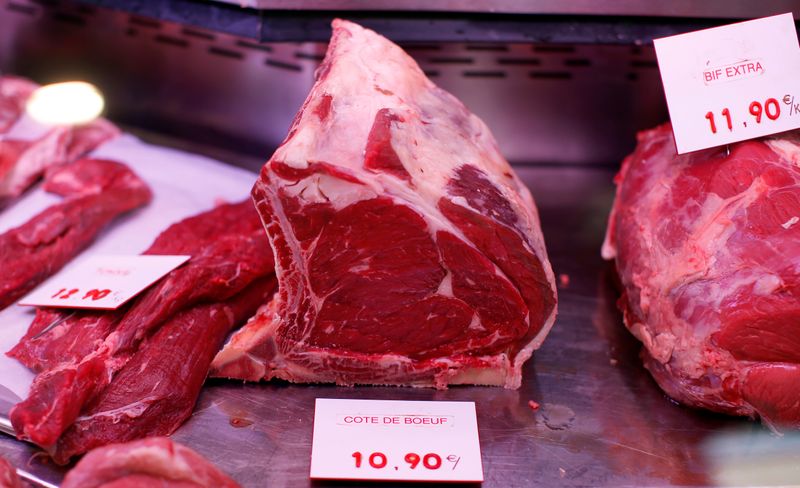 © Reuters. FILE PHOTO: Cuts of beef meat are displayed for sale at the Boucherie St Francois butcher shop in the old city of Nice


PARIS (Reuters) – In the land of coq-au vin, blanquette de veau and boeuf bourguignon, meat-free meals in schools are a sacrilege, as far as some French government ministers are concerned.

So a decision by the Ecologist Green Party mayor of Lyon that only vegetarian meals will temporarily be served in the city’s schools due to meat supply problems caused by the pandemic, led to vehement criticism by the agriculture and interior ministers.

They in turn were sharply rebuked by the environment minister, in an unusual display of discord within the cabinet.

“This is absurd from a nutritional point of view and a scandal from a social point of view,” Agriculture Minister Julien Denormandie said on RTL radio on Tuesday.

On his Twitter feed on Saturday, conservative Interior Minister Gerald Darmanin slammed the “scandalous ideology” of the Lyon city government.

“Besides being an unacceptable insult to France’s farmers and butchers, it is clear that the Greens’ moralist and elitist policies exclude low-income people. For many children, the school canteen is the only place where they get to eat meat,” he said.

During a visit to a school restaurant on the French Atlantic coast on Monday, Environment Minister Barbara Pompili praised a menu of zucchini soup, spaghetti with lentils, carrots and tomatoes, goat cheese and a pear dessert.

She said that under new government policies, schools would be encouraged to experiment with a daily vegetarian menu option and she called the debate about the Lyon menu “prehistoric”.

Environmentalists argue that meat uses up an inordinate amount of land compared to plant-based protein and worsens climate change and deforestation.

During an agriculture-themed visit to a farm on Tuesday, Macron tip-toed around the issue pleading for “a complete model of nutrition” and “quality meat” produced in France.