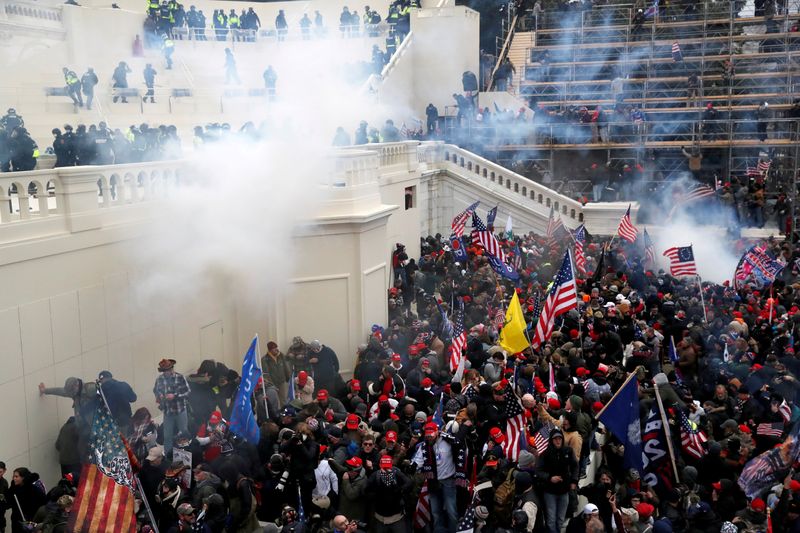 NEW YORK (Reuters) – A former New York City police officer has been charged with using an aluminum pole to attack a U.S. Capitol officer during the Jan. 6 assault on the Capitol building by supporters of former president Donald Trump.

Webster, who is also a former Marine, surrendered to authorities in New York’s Hudson (NYSE:) Valley on Monday, after the FBI had sought the public’s help in finding him.

A federal prosecutor said the married father of three was seen on captured on video at the Capitol where he assaulted a police officer with the pole and his bare hands, ripped off the officer’s protective gear, and shouted obscenities.

“These videos shocked the conscience,” Assistant U.S. Attorney Benjamin Gianforte said, adding that there had been “a look of pure rage on the defendant’s face. His teeth were gritted.”

Webster’s lawyer argued that the defendant had gone to Washington merely to protest.

Krause agreed that Webster was not a flight risk, but said he would pose a danger to the community if released.

“As a judge, I certainly have the utmost respect for people’s constitutional rights to protest and to speak out in whatever way they see fit,” Krause said. “But what we see in this video … goes well beyond First Amendment speech and moves into criminal activity.”

More than 200 people have been charged for their roles in the Capitol riot, which left five people dead and caused members of Congress to flee.

The assault followed a speech by then-Republican President Trump to his supporters where he challenged the results of the 2020 presidential election, which Democrat Joe Biden won.