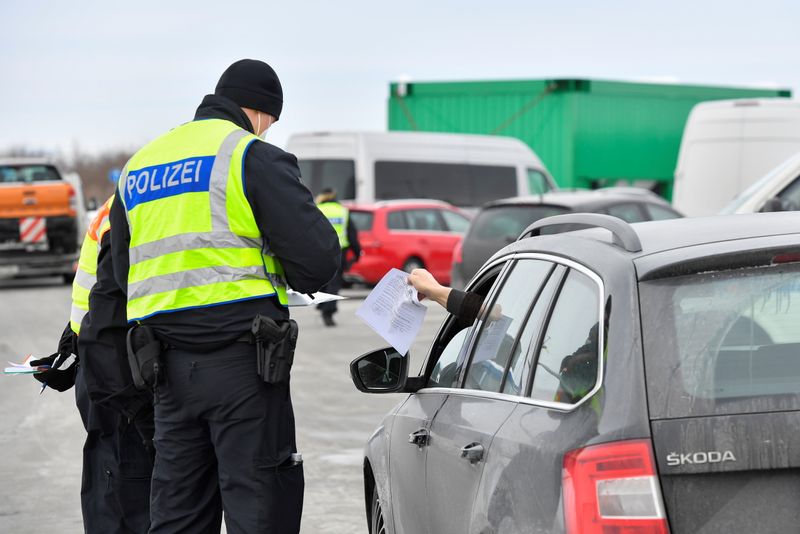 © Reuters. FILE PHOTO: The German-Czech border crossing of Breitenau is closed due to COVID-19 precautions

BERLIN/BRUSSELS (Reuters) – The European Commission on Tuesday said travel and border curbs set up by six EU nations to combat COVID-19 variants were too tight, as it sought to push through a coordinated approach to managing the movement of goods and people within the bloc.

The EU executive said it had given Belgium, Denmark, Finland, Germany, Hungary and Sweden 10 days to justify restrictions, which Justice Commissioner Didier Reynders said had “gone too far”.

Germany, having introduced checks on its frontiers with the Czech Republic and Austria, was in talks with France on averting similar measures in the Moselle region that straddles the Franco-German border.

The French part of the region, which also stretches into Luxembourg, has experienced a surge in a more easily transmissable coronavirus variant.

With long lines of trucks having formed on the Czech-German frontier this month, the bloc’s Europe ministers on Tuesday discussed health, border and travel issues via videolink.

Reynders said the 27 states needed to “go back to a coordinated approach to all the measures taken in relations with the free movement of people and goods.”

A European Commission spokesman said that the bloc risked “fragmentation and disruptions to free movement and to supply chains – something we have witnessed again the past weeks.”

In a patchwork response to the threatened spread of more contagious coronavirus mutations, nine EU countries have reinstated border controls in what is normally the bloc’s zone of free travel.

The Commission is however focusing on the six with additional restrictions on movement including a complete ban on non-essential trips in and out of the country in the case of Belgium.

Michael Roth, Europe Minister for Germany, defended Berlin’s actions. “These measures obviously put a massive strain on border regions… but the protection of our citizens is paramount,” he said prior to the talks with his EU counterparts.

His French peer Clement Beaune told Reuters that Berlin and Paris had given themselves 48 hours to coordinate health measures such as increased testing in the Moselle region to try to keep that part of the border open to workers.

French President Emmanuel Macron has consistently advocated that internal borders between EU countries remain open, and clashed with Germany last year after Berlin closed the frontiers during the first wave of the pandemic.

Germany now aims to avoid the kinds of strict border measures that were in place in 2020, sources in Berlin said.