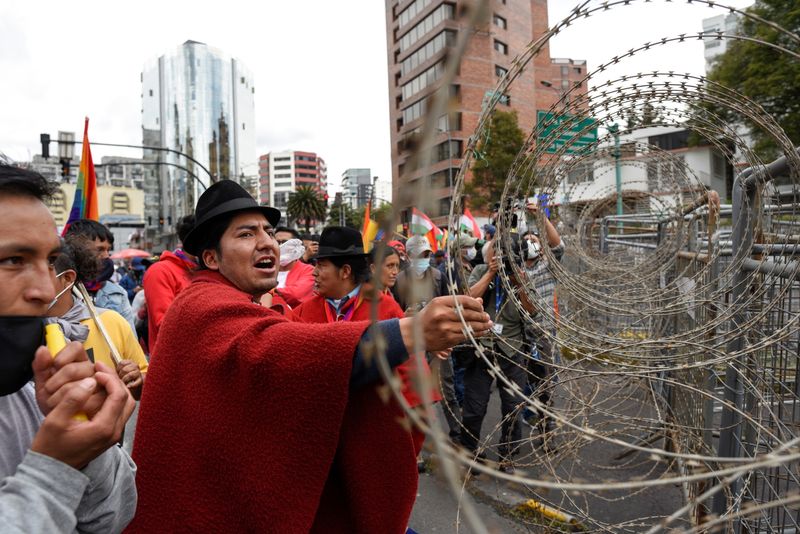 QUITO (Reuters) – Hundreds of Ecuadorean indigenous protesters arrived in the capital Quito on Tuesday to demand a recount of the Feb. 7 presidential election after official results showed indigenous activist Yaku Perez did not advance to the runoff vote.

Perez, 51, has been walking through the Andean nation to denounce what he calls manipulation of poll statements that left him in third place, after left-wing economist Andres Arauz and conservative banker Guillermo Lasso.

The elections council on Sunday confirmed that Arauz and Lasso will advance to the April 11 runoff, with the final tally showing Perez less than a percentage point behind Lasso.

Demonstrators arrived by bus in southern Quito on Tuesday carrying the flag of the Pachakutik party that backs Perez. They congregated in a park and shouted slogans including “transparency yes, fraud no.”

“We are going to give the National Electoral Council one last chance,” Perez said at a rally in a Quito park. “This fraud cannot go unpunished, nobody can hide it.”

He later took boxes with more than 16,000 poll statements that he says show inconsistencies to the elections council.

Candidates can file objections or contest the results of the vote before the electoral council or the elections court.

Perez wants a recount in 17 of Ecuador’s 24 provinces.

Perez made a surprisingly strong showing after running on a platform to protect water resources from the mining industry and to recover money from corruption by previous leaders.

“Yaku is a leader and worker just like us, he walks together with us,” said Rosa Salinas, 58, who makes a living weaving straw hats. “We want transparency, we don’t want politicians to deceive us.”