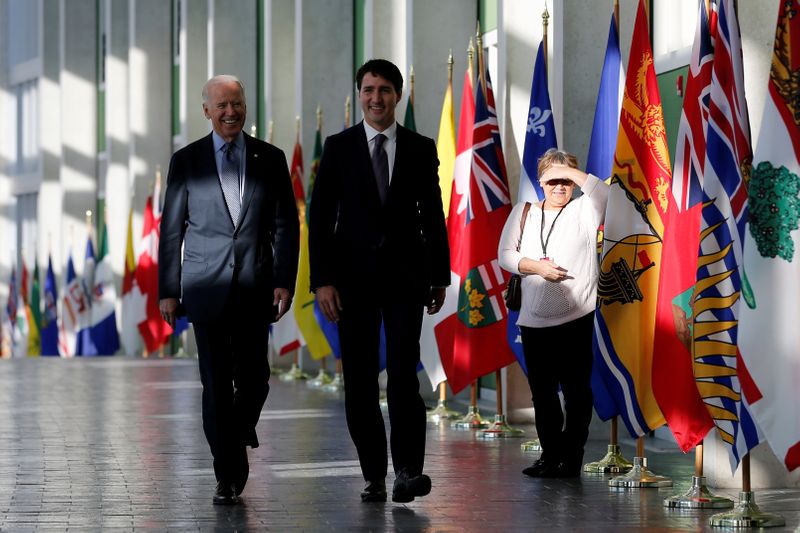 By Trevor Hunnicutt and Steve Scherer

WASHINGTON/OTTAWA (Reuters) – U.S. President Joe Biden and Canadian Prime Minister Justin Trudeau will try on Tuesday to move past an early disagreement after Biden blocked the Canadian-backed Keystone XL pipeline and look to reset relations after the rocky years of Donald Trump.

In his first bilateral meeting with a foreign leader since taking office last month, Biden is expected to discuss with Trudeau a host of issues including climate change and China, a senior U.S. administration official told reporters.

Canada has often been a U.S. president’s first foreign stop, but the COVID-19 pandemic has turned the sit-down between the two leaders and some of their top deputies into a virtual affair.

The event is likely to result in a shared document outlining cross-government collaboration on a wide range of issues, the senior U.S. administration official said.

It was not clear the meeting would result in any new deal on those or other concerns, including Canada’s access to vaccines produced in the United States or a shared standoff with China over the detention of a Huawei executive.

“The most important thing here is a reinvigorated road map for cooperation between the United States and Canada, meaning that we’re going to talk regularly to one of our closest allies to make sure that there’s no kind of misunderstandings,” the U.S. official said.

Biden is eager to address security threats from climate change to the coronavirus pandemic as well as China, Iran, Russia and North Korea.

Trudeau is aiming to show he is now aligned with Washington on issues including COVID-19, climate change and foreign policy, a Canadian government source said.

The sources spoke on condition of anonymity ahead of the bilateral meeting.

“We expect the president, during the meeting, to highlight the strong and deep partnership between the United States and Canada as neighbors, friends and NATO allies,” White House spokeswoman Jen Psaki said on Monday.

An administration official said Biden would raise the topic of the countries’ investment in the North Atlantic Treaty Organization. Trump often disparaged allies for their shortfall in funding the mutual defense organization.

Trudeau was the first world leader to congratulate Biden when the Democrat was declared the winner of the November U.S. election, illustrating the degree to which Canada, one of America’s closest allies, is looking to turn the page on the Trump era.

The Republican former president, who often clashed with traditional allies on trade, imposed tariffs on Canadian aluminum and steel. The two countries have one of the world’s largest bilateral trading relationships.

Tuesday’s event is expected to start at 4 p.m. (2100 GMT), according to a Canadian official. A U.S. official said it would begin with a 45-minute meeting between Biden, Vice President Kamala Harris, Secretary of State Antony Blinken, national security adviser Jake Sullivan and their Canadian counterparts.

An expanded meeting following that is expected to include a broader set of officials. Trudeau will be accompanied by his finance minister, Chrystia Freeland, and others. Biden and Trudeau will then address the public around 5:45 p.m. (2245 GMT).

The official said the White House expected Trudeau to raise the issue of two Canadians detained by Beijing and charged with espionage after Canada’s detention of Meng Wanzhou, chief financial officer of China’s Huawei Technologies Co Ltd, on a U.S. arrest warrant.

The official said the White House believed the Canadians were unjustly detained and would work to secure their release but added it would not meddle in independent Department of Justice matters. Meng remains under house arrest.

Canada is also seeking exemptions to a U.S. effort to ensure federal agencies buy American-produced goods. The U.S. move could hurt Canada, given how tightly the two nations’ economies are integrated.