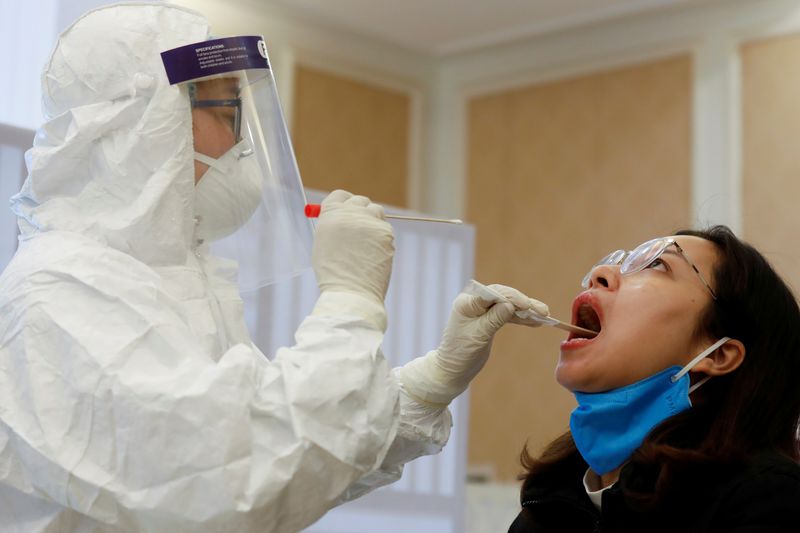 © Reuters. FILE PHOTO: A health worker takes a sample for a coronavirus test in Hanoi


HANOI (Reuters) – Vietnam’s government said on Tuesday health workers, diplomats and military personnel would be among the first to be vaccinated against COVID-19 when the country starts its inoculation programme next month.

The Southeast Asian country with a population of 98 million said it will receive 60 million vaccine doses this year, including half under the WHO-led COVAX scheme.

In the first quarter of 2021, Vietnam aims to inoculate 500,000 medical staff and 116,000 others directly involved in the fight against the pandemic, the government said in a statement.

Vietnam was lauded globally for containing the virus for months using mass testing and strict quarantining, though has faced a recent new wave of infections.

The government said previously it was in talks with Russian and U.S. vaccine manufacturers on potential supply agreements, while it expects a home-grown vaccine to be ready for domestic inoculation by May.

The country intends for 16 million to be vaccinated by the end of the third quarter, including 7.6 million people over the age of 65, the government said.

Vietnam has recorded 803 new COVID-19 cases since the latest outbreak started last month or about a third of its overall caseload of 2,395 infections since infections were first detected a year ago. Vietnam has reported 35 deaths due to the virus.