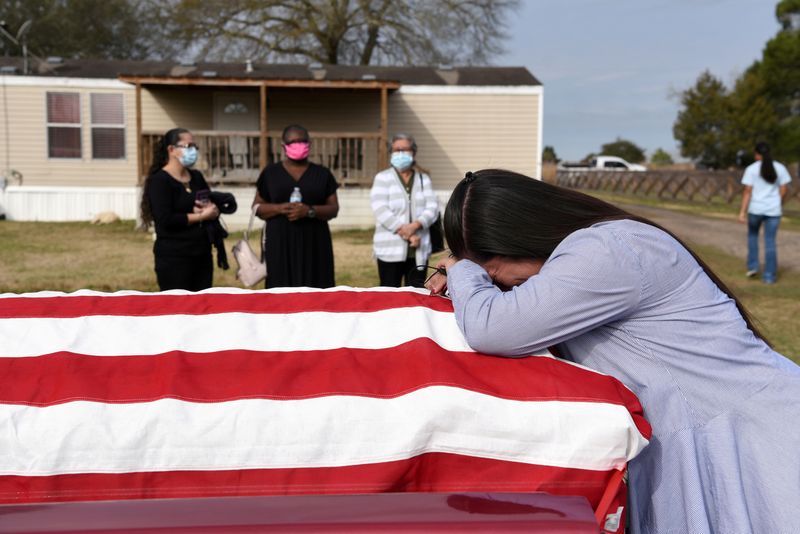 © Reuters. FILE PHOTO: Family and friends gather for the funeral of Gregory Blanks, who died of COVID-19

(Reuters) – Over half a million people have died of coronavirus in the United States, as the country races to vaccinate its most vulnerable residents before new variants of the deadly disease become widespread.

More people have died in the United States due to COVID-19 than any other country in the world. With 4% of the world’s population, the United States has 20% of all COVID deaths and one of the highest rates of deaths per 100,000 residents, exceeded by only a few countries such as Belgium, the United Kingdom and Italy. (Graphic: https://tmsnrt.rs/34pvUyi)

Unlike many countries around the world that had national lockdowns and mask mandates, former U.S. President Donald Trump left public health decisions to state and local governments, resulting in a patchwork of rules that often contradicted the advice of doctors and health officials. Following many maskless yearend holiday gatherings, January became the deadliest month of the pandemic so far with an average of 3,000 people dying every day.

The United States has reported over 28 million cases to date, about 25% of all global infections. After peaking at nearly 300,000 new cases in a single day on Jan. 8, the United States is now reporting about 70,000 new infections each day.

However, new variants of the virus threaten to disrupt the path to normalcy.

Officials have also warned that most of these cases are from a more transmissible variant first discovered in the United Kingdom called B.1.1.7, which could become the dominant variant in the United States by March.

Health officials are also worried about a variant first identified in South Africa called 501Y.V2, which has multiple mutations in the important “spike” protein that current vaccines are targeting.

About 15% of the U.S. population has received at least one vaccine dose so far and more than 63 million doses have been administered, according to the Centers for Disease Control and Prevention.

In early February, the Biden administration said it is exploring options for increasing manufacturing of Johnson & Johnson (NYSE:)’s COVID-19 vaccine which is one shot and can be stored in a refrigerator. The Pfizer-BioNTech and Moderna (NASDAQ:) Inc vaccines both require two doses and the Pfizer (NYSE:) vaccine requires special freezers.

Johnson & Johnson’s vaccine is under review by the U.S. health regulator, and a panel of the Food and Drug Administration’s experts are expected to discuss the vaccine’s emergency use authorization this week.

However, U.S. President Joe Biden said in early February that it will be difficult for the United States to reach herd immunity, at least 75% of the population inoculated, by the end of this summer.

Vaccine rollout has been challenging as the Trump administration left it up to states to design and implement their own rollout plans. The United States also lacks a national healthcare system and often relies on grocery stores and drug store chains to provide immunizations.

This has led to a growing disparity among states on vaccination progress, including that Blacks and Hispanics are lagging in getting inoculations. In many parts of the country, long lines and hours of waiting was not an uncommon sight.

White House officials said last week that the country has a backlog of 6 million COVID-19 vaccine doses due to inclement weather that swept much of the United States.