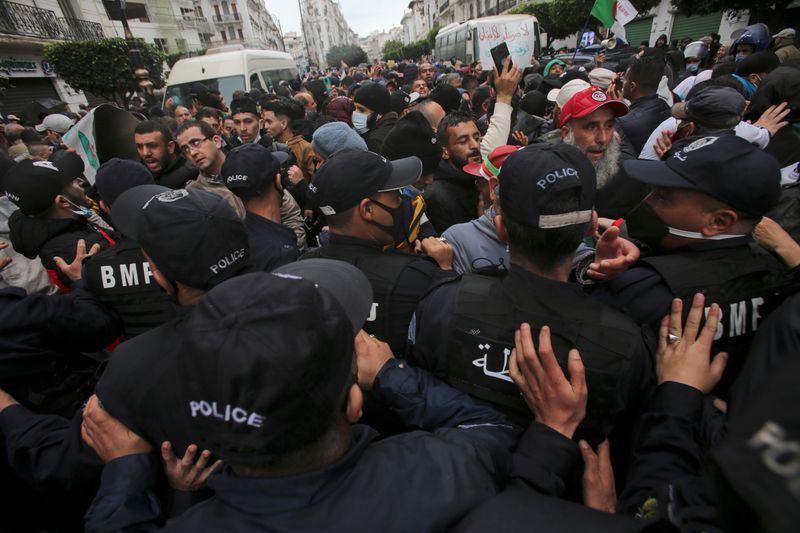 ALGIERS (Reuters) – Thousands of demonstrators defied a heavy police presence in Algiers on Monday for a march to mark the second anniversary of a mass protest movement that convulsed Algeria before the COVID-19 pandemic forced it off the streets.

Chanting “A civilian state not a military state!”, “Enough is enough!” and “The people want independence!”, protesters walked through the centre of the capital, waving national flags, watched by large numbers of police.

Some of the protesters hope to revive the twice-weekly protests that surged through Algerian cities from February 2019 for more than a year, regularly bringing tens of thousands of people to the streets until the global pandemic began.

“We are determined to continue our battle until victory,” said Djamel Habi, a student.

However, some other protesters said the march was symbolic rather than a return to regular demonstrations, or that without a clear opposition leadership they were not yet sure whether to continue with protests.

Though the 2019 protests led the army to push veteran president Abdelaziz Bouteflika from power after two decades in office and jail many senior figures for corruption, many of the demonstrators wanted a more thorough change.

“We will stick to our principles until all demands are met,” said Mohamed Tadjer, a 30-year old employee of Algeria’s state insurance company.

“Things must change. We are fed up,” said Ahmed Kachime, 25, a student.

The main demands of the leaderless, unorganised protest campaign, known as Hirak (Movement), were the ousting of Algeria’s old ruling elite, an end to corruption and the army’s withdrawal from politics.

After Bouteflika was ousted, the authorities held a presidential election that Hirak supporters viewed as a sham and which resulted in Abdelmadjid Tebboune winning the presidency in December 2019.

He made some moves to meet protesters’ grievances, including minor changes to the constitution, but the very low turnout in a referendum to affirm the reforms indicated that his efforts had little public backing.

Tebboune returned to Algeria last week after spending most of the past four months in Germany receiving medical treatment after contracting COVID-19.