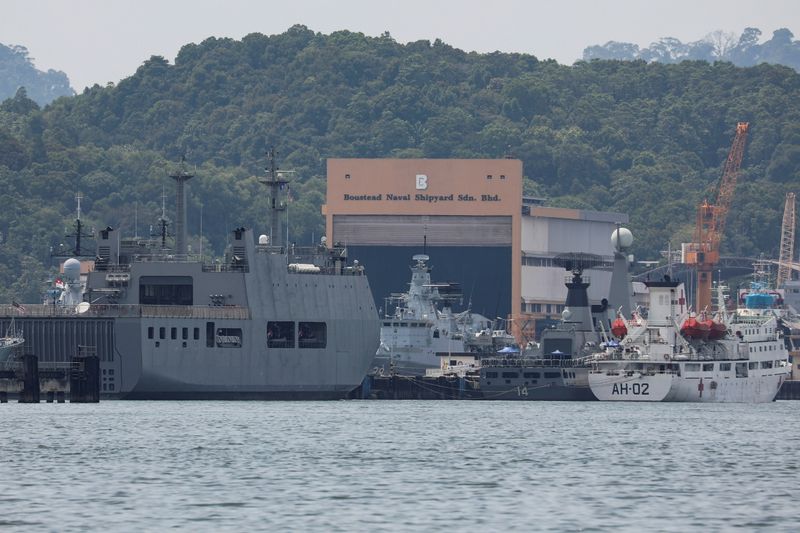 © Reuters. Myanmar Navy vessels are docked at a jetty in Lumut

Officials and refugees say Malaysia is set to deport the Myanmar citizens, including asylum-seekers, on Tuesday on three navy ships sent by Myanmar’s military, which seized power in a Feb. 1 coup.

The United Nations High Commissioner for Refugees (UNHCR) has said at least six people registered with it are among the immigration detainees being sent back.

The Malaysian chapters of Amnesty International and Asylum Access said in a statement they had filed for a judicial review at the Kuala Lumpur High Court, based on information indicating asylum seekers and refugees were among those being deported.

The filing, they said, included the names and details of three UNHCR document holders and 17 minors who have at least one parent still in Malaysia.

“Separating children from their parents is an extremely inhuman practice that places these minors at grave risk and goes against the best interest of the child,” Amnesty Malaysia executive director Katrina Jorene Maliamauv said.

The Malaysian government, Home Affairs Ministry and Director-General of the Immigration Department were named as respondents in the suit, the groups said. The respondents did not respond to requests for comment.

Malaysia has said it will not deport Rohingya Muslims or refugees registered with the UNHCR.

But concerns over deportation of unregistered asylum-seekers persist as the UNHCR has not been allowed to interview detainees for over a year to verify their status.

The deportees include people from Muslim and Chin communities fleeing conflict and persecution at home, refugee groups have said.

The UNHCR said it had not yet received an official response to its request to access detention centres before the deportation, and could not confirm details of those being deported.

Saudi prince pushes on with $500 billion megacity as U.S. points the finger over Khashoggi killing By Reuters