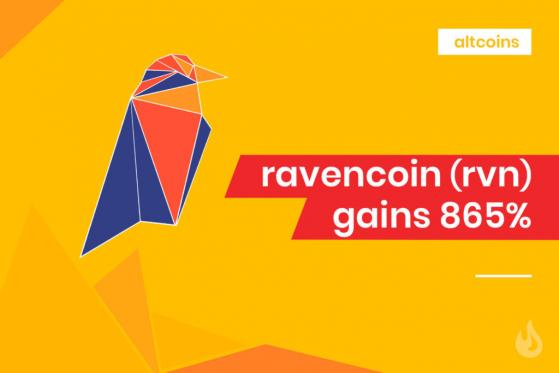 
2021 has been a bullish year for crypto-currencies so far and the latest cryptocurrency to see a massive gain is Ravencoin (RVN). 2021 rolled by and Ravencoin traded at a lowly 0.016 at the end of January and a massive price rally began to form, bringing the value to an all-time high of $0.189.

Industry experts cite the growing interest in Tokenized Securities as the reason for Ravencoin’s growth in the last 20 days. Currently, the market capitalization of Ravencoin sits at an Impressive$ 1.45 billion which places it as the largest cryptocurrency by market value.

Ravencoin: New Coin On The Block

Ravencoin was launched in 2018 as an offshoot of Bitcoin which is designed to make the transfer of assets from one party to another a seamless process. Using the X16R proof of work algorithm which is impervious to ASIC mining, users can create assets on the platform provided such assets tick all the boxes of the crypto-currency.

While a wide range of tokens such as securities, credit, and commodities can be hosted on the platform, it seems that securities have been given preferential treatment. Ravencoin says that it was “specifically designed and developed with securities as a major use case. Specifically, the problems being seen in public markets due to bad ledger may be solved by distributed ledger technology.”

Ravencoin’s supply is currently capped at 21 billion coins with block rewards set at 5,000 Ravencoin per block and blocks will go through halving every four years. Each block time is pegged at one minute.

Currently, Ravencoin is trading at 0.1831 and has gone through the largest positive swing in prices in the last 20 days, rising by over 865% in the last 20 days. With market capitalization at $1.45 billion just above yearn.finance.

The Future is Tokenised Securities

Tokenised Securities are simply Tokenized assets that are tradeable. They represent an underlying financial instrument on the blockchain and are issued through a process called tokenization.

Tokenised Securities have gained popularity in the last few years with the increasing adoption of Blockchain technology. Tokenized security increases the level of transparency and the process of auditing and maintaining shareholders’ registry is a lot easier using tokenized securities.

The decentralization of blockchain eliminates intermediaries thereby saving a great deal of time and cost. Seeing the immense benefits of digital tokens and tokenized securities, Ravencoin is perfectly poised to take advantage of the growing interest. Already up in price by 145% in the last 7 days, it’s looking to soar even higher.

Utilizing data from VORTECS analysts can predict with a certain degree of accuracy and price value of coins. VORTECS uses historic and current market conditions, trading volume, price, and Twitter activity to accurately pinpoint the direction of a price run. VORTECS was able to predict the meteoric rise of Ravencoin’s price to a reasonable degree.