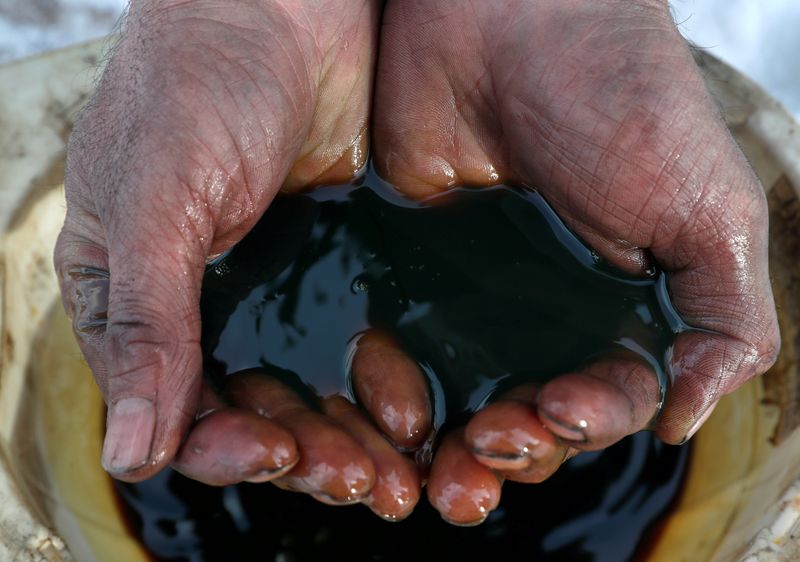 © Reuters. FILE PHOTO: An employee holds a sample of crude oil at the Irkutsk Oil Co-owned Yarakta field in the Irkutsk region

SINGAPORE (Reuters) – Oil prices rose again on Tuesday after a jump in the previous session, holding near a more than 13-month high as U.S. output was slow to return after a deep freeze in Texas shut in crude production last week.

Shale oil producers in the southern United States could take at least two weeks to restart the more than 2 million barrels per day (bpd) of crude output that shut down because of cold weather, as frozen pipes and power supply interruptions slow their recovery, sources said.

“The positive momentum continues in the oil complex, with investors unabashedly predisposed to a bullish view,” said Stephen Innes, chief global markets strategist at Axi in a note.

“Several significant oil price revisions were announced overnight and may have contributed to the rally of over 3%,” he said.

The Wall Street bank expects Brent prices to reach $70 per barrel in the second quarter from the $60 it predicted previously and $75 in the third quarter from $65 earlier.

Morgan Stanley (NYSE:) expects Brent crude prices to climb to $70 per barrel in the third quarter on “signs of a much improved market” including prospects of improving demand.

Also supporting prices, OPEC and U.S. oil companies see a limited rebound in shale oil supply this year as top U.S. producers freeze output despite rising prices, a decision that would help OPEC and its allies.

Stockpiles of U.S. crude oil and refined products likely declined last week, a preliminary Reuters poll showed on Monday, due to the disruption in Texas.