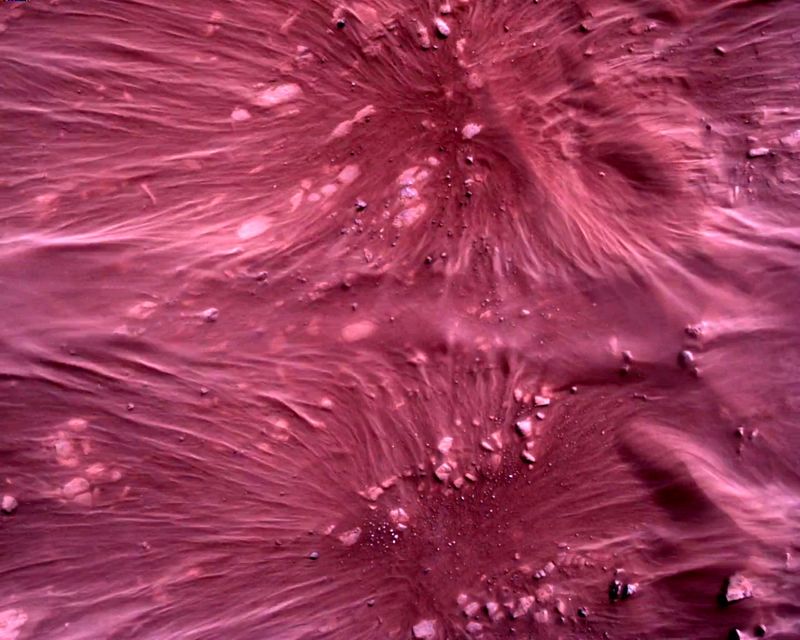 The footage was recorded on Thursday by a series of cameras mounted at different angles of the multi-stage spacecraft as it carried the rover, named Perseverance, through the thin Martian atmosphere to a gentle touchdown inside a vast basin called Jezero Crater.

Thomas Zurbuchen, NASA associate administrator for science, called seeing the footage “the closest you can get to landing on Mars without putting on a pressure suit.”

The video montage was played for reporters tuning in to a news briefing webcast from NASA’s Jet Propulsion Laboratory (NYSE:) (JPL) near Los Angeles four days after the historic landing of the most advanced astrobiology probe ever sent to another world.

NASA also presented a brief audio clip captured by microphones on the rover after its arrival that included the murmur of a light wind gust – the first ever recorded on the fourth planet from the sun.

JPL imaging scientist Justin Maki said NASA’s stationary landing craft InSight, which arrived on Mars in 2018 to study its deep interior, previously measured seismic signals on the planet that were “acoustically driven” and then “rendered as audio.”

But mission deputy project manager Matt Wallace said he believed the Martian breeze represented the first ambient sound directly recorded on the surface of Mars and played back for humans.

The spacecraft’s mics failed to collect useable audio during descent to the crater floor. But they did pick up a mechanical whirring from the rover after its arrival. Wallace said he hoped to record other sounds, such as the rover’s wheels crunching over the surface and its robotic arm drilling for samples of Martian rock.

‘THE STUFF OF OUR DREAMS’

But it was film footage from the spacecraft’s perilous, self-guided ride through Martian skies to touchdown – an interval NASA has dubbed “the seven minutes of terror” – that JPL’s team found particularly striking.

“These videos, and these images are the stuff of our dreams,” Al Chen, head of the descent and landing team, told reporters. JPL Director Mike Watkins said engineers spent much of the weekend “binge-watching” the footage.

The video, filmed in color at 75 frames a second, shows action in fluid, vivid motion from several angles, the first such imagery ever recorded of a spacecraft landing on another planet, Wallace said.

One of the most dramatic moments is of the red-and-white parachute being shot from a canon-like launch device into the sky above the rover as the spacecraft is hurtling toward the ground at nearly two times the speed of sound.

The chute springs upward, unfurls and fully inflates in less than two seconds, with no evidence of tangling within its 2 miles (3.2 km) of tether lines, Chen said.

A downward-pointing camera shows the heat shield falling away and a sweeping vista of the butterscotch-colored Martian terrain, appearing to shift back and forth as the spacecraft sways under the parachute.

Seconds later, an upward-pointed camera captures the rocket-powered “sky-crane” vehicle, newly jettisoned from the parachute, its thrusters firing but the propellant plumes invisible to the human eye while lowering the rover to a safe landing spot on a harness of tethers.

A separate camera shows the lowering of the six-wheeled rover from the vantage point of the sky crane, looking downward as Perseverance dangles from its cable harness just over the surface with streams of dust billowing around it at touchdown. The sky crane is then seen flying up and away from the landing site after the harness cables are cut.

A single still photo of the rover suspended from the sky crane moments before landing was released by NASA on Friday amid much fanfare as a precursor to the video shown on Monday.

The only previous moving footage produced of a spacecraft during a Mars landing was a comparatively crude video shot from beneath the previous rover, Curiosity, during its descent to the planet’s surface in 2012. That stop-motion-like sequence was shot at 3.5 frames per second from a single angle that showed the ground gradually getting closer but included no images of the parachute or sky-crane maneuvers.