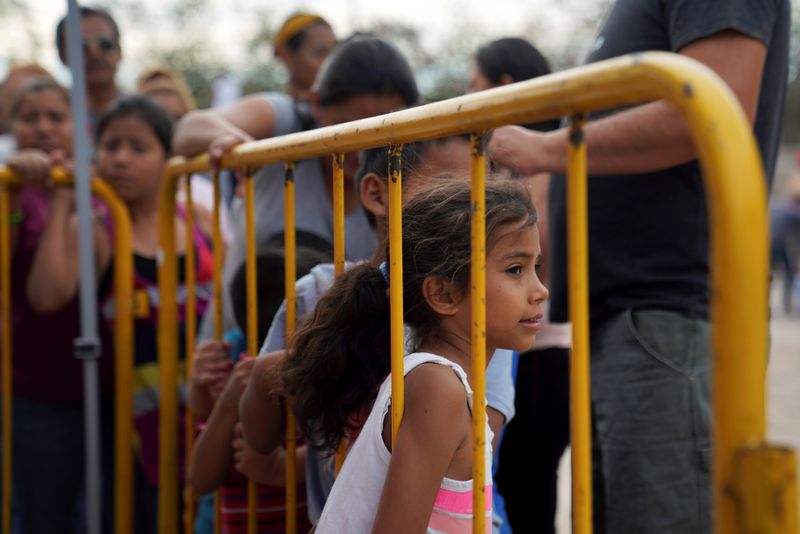 © Reuters. FILE PHOTO: Asylum seekers wait for a meal at a migrant camp where social distancing is difficult to practice, in Matamoros


By Ted Hesson and Laura Gottesdiener

MONTERREY, Mexico (Reuters) – The United States abruptly canceled plans on Monday to bring asylum seekers into Texas at two ports of entry, dashing the hopes of hundreds who have been waiting for months in Mexico under a Trump-era policy President Joe Biden promised to unwind.

The U.S. Department of Homeland Security (DHS) said in a statement that “given current operational considerations,” it could no longer say when it would begin bringing in migrants through ports in Brownsville and El Paso, Texas. The department said last week it would start accepting asylum seekers with active cases at those locations on Monday and Friday, respectively. Texas is recovering from a winter storm that knocked out power and water services across the state.

A DHS spokeswoman did not give a specific reason for the delay, but said the agency would begin to use those locations once international partners implemented certain measures to ensure security, health and adequate processing systems.

Biden pledged to roll back the Trump-era program, known as the Migrant Protection Protocols (MPP), which forced more than 65,000 mostly Central American asylum seekers back across the border pending U.S. immigration court hearings. Most returned home but some stayed in Mexico in sometimes squalid or dangerous conditions, vulnerable to kidnapping and other violence.

The Biden administration has said it will first seek to deal with about 25,000 people with active cases, and the United Nations has set up a website for people to register.

“We are really confused because we don’t see any change. We are just looking for help,” said Josue Cornejo, a migrant from Honduras who has been stuck in a makeshift camp in Matamoros, Mexico, across the border from Brownsville, for over a year. “They aren’t telling us anything,” he said in a video message.

The effort to reverse the program started slowly on Friday at a port of entry in San Ysidro, California, where so far 50 asylum seekers have been processed, according to Democratic Representative Nanette Barragan who visited the border.

A U.N. official said on Monday that the organization has registered more than 7,700 migrants with active cases since Friday, but less than half have been notified of an appointment time to come to the U.S.-Mexico border. The official said asylum seekers in the Matamoros camp could be processed in coming days.

The global body is also tasked with testing migrants for COVID-19 in Mexico before they arrive at U.S. ports of entry, while non-profits on the U.S. side are providing shelters for migrants to quarantine upon arrival.

Mark Manly, a U.N. official in Mexico, told Reuters on Friday that the website ran slowly at times, but called it “teething problems.”

Ethereum fees are skyrocketing — But traders have alternatives By Cointelegraph