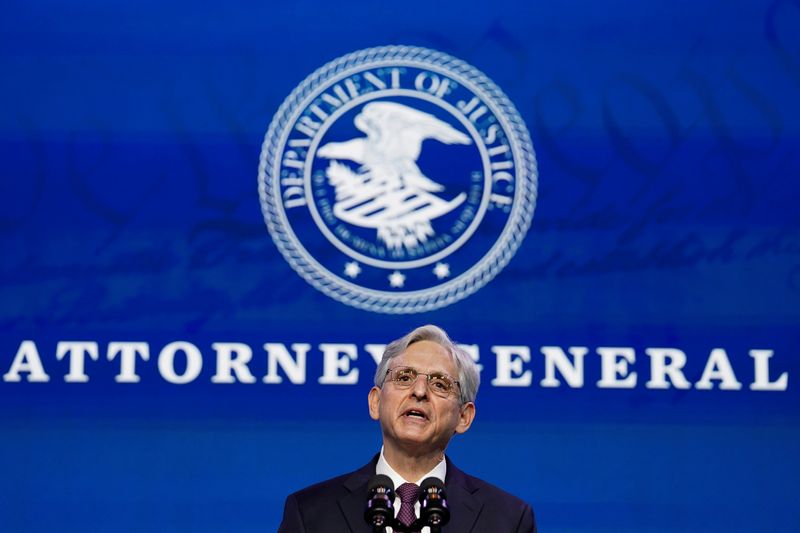 WASHINGTON (Reuters) – Merrick Garland, President Joe Biden’s attorney general nominee, told the Senate Judiciary Committee on Monday he would make the investigation of the Jan. 6 riots at the U.S. Capitol a top priority, and said he feared the incident was “not necessarily a one-off.”

“We must do everything in the power of the Justice Department to prevent this kind of interference with policies of American democratic institutions,” Garland said during his confirmation hearing.

“I don’t yet know what additional resources will be required by the department. I can assure you this will be my first priority.”

The Senate is widely expected to confirm Garland, a federal appellate judge and former prosecutor, as the top U.S. law enforcement official.

He was nominated to lead a Justice Department now in the midst of intensive investigations into the Jan. 6 attack on the U.S. Capitol by a mob of Republican former President Donald Trump’s supporters – an incident Garland called “heinous.”

Some of the more than 200 people arrested in the siege were associated with groups such as the Oath Keepers and Proud Boys, underscoring rising concern about future violence from right-wing extremists.

Garland has experience in tackling such threats, having managed the sprawling investigation into the 1995 Oklahoma City bombing by anti-government extremists and supervising the prosecution of the so-called Unabomber Theodore Kaczynski after a deadly bombing spree.

Republicans, for their part on Monday, pressed Garland on other matters of interest, including asking whether he had discussed the Justice Department’s investigation into Biden’s son Hunter with the White House.

“The president has made abundantly clear in every public statement before and after my nomination that decisions about investigations and prosecutions will be left in the Justice Department,” Garland told lawmakers, after the panel’s ranking Republican Charles Grassley asked him if he had discussed the investigation into Hunter Biden’s taxes with the White House.

“So the answer to your question is no.”

He also told Republicans he expects to allow John Durham, who was appointed by former Attorney General William Barr to investigate the origins of the investigation into Trump’s 2016 presidential campaign, to be able to continue his work.

“I understand that he has been permitted to remain in his position and sitting here today I have no reason to think that that was not the correct decision,” Garland said.