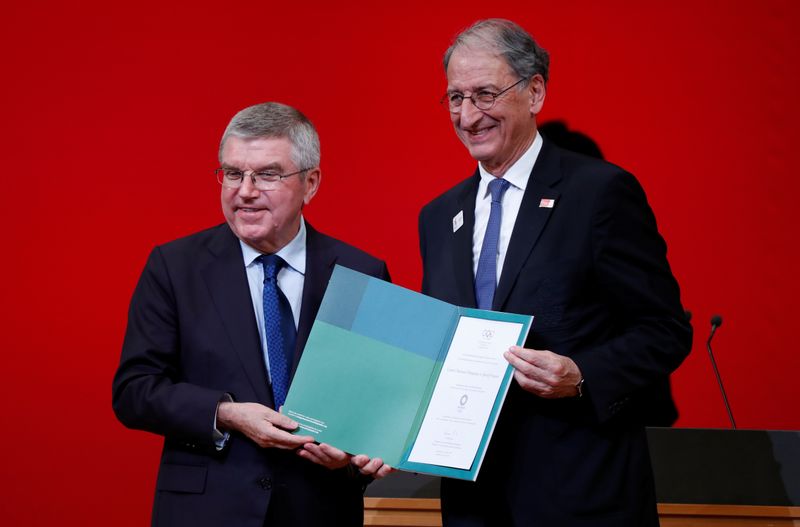 © Reuters. IOC President Bach presents invitation to Olympic Games to President of the French Olympic Committee Masseglia during a ceremony in Tokyo


TOKYO (Reuters) – Athletes aiming to compete at this year’s Tokyo Games without getting vaccinated against the coronavirus will face very tough conditions, the head of France’s Olympic Committee (CNOSF) was quoted as saying.

More than 15,000 competitors expected at the Games, which are due to start on July 23. They were postponed last year because of COVID-19.

International Olympic Committee President Thomas Bach has said that although participants will be encouraged to get vaccinated, it will not be mandatory.

CNOSF President Denis Masseglia said that, while he understood that Olympic competitors could not jump the vaccine queue, unvaccinated athletes would find things “extremely difficult” in Tokyo.

“Between now and the Games we can think that there is the possibility of having them vaccinated without this penalising other people,” sports daily L’Equipe quoted him as telling a meeting of the French committee on Monday.

According to Le Parisien, Masseglia added that athletes should face “a form of quarantine” once in Japan and that daily testing might be necessary.

Tokyo organisers have previously said that athletes will not have to face the mandatory 14-day quarantine that arrivals in Japan currently must undertake.

Le Parisien reported that, when contacted later on Monday, Masseglia said he had gone “a little fast” in predicting major difficulties for non-vaccinated athletes.

“That’s not really what I meant,” he was quoted as saying.

“It is not known whether the Games will be held behind closed doors or with spectators. The priority is and will remain the health of athletes and the Japanese (population).”

Last week, Japan and the IOC recommitted to holding the Olympics this year, denying a report in Britain’s Times newspaper that the government had privately concluded the Games would have to be cancelled.

The IOC is due to hold an executive board meeting in Switzerland on Wednesday.