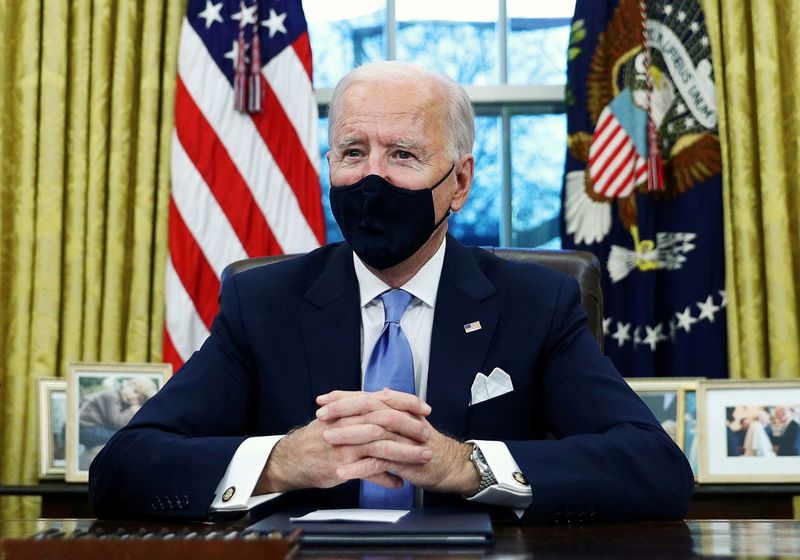 © Reuters. FILE PHOTO: Inauguration of Joe Biden as the 46th President of the United States


By Nichola Groom and Jennifer Hiller

(Reuters) – President Joe Biden’s administration has temporarily suspended oil and gas permitting on federal lands and waters in the latest of a series of rapid-fire orders aimed at fighting climate change and tamping down the U.S. fossil fuel industry.

The order appeared to be a first step in delivering on newly sworn-in Biden’s campaign pledge to permanently ban new drilling on federal acreage. Federal leases account for close to 25% of the nation’s output, making them a big contributor to energy supply but also to America’s greenhouse gas emissions.

The suspension was welcomed by environmentalists but derided by the oil and gas industry, which is struggling to secure a future under a new administration that has vowed to make countering global warming a top priority.

The 60-day pause strips Interior Department agencies and bureaus from their authority to issue drilling leases or permits while the administration reviews the legal and policy implications of the federal minerals leasing program, according to a Department of Interior memo. The order does not limit existing operations, it said.

“This is a frack ban,” Anne Bradbury, chief executive of the drilling trade group American Exploration & Production Council, said in an interview. “Even just for 60 days it’s a really aggressive move.”

Many of the largest onshore drilling companies had stockpiled permits https://www.reuters.com/article/idUSKBN29Q1S5 in anticipation of a change in federal policy ahead of Biden’s election, insulating them from a ban.

The order came close on the heels of a raft of other executive actions aimed at fighting climate change, including re-engaging the United States in the Paris climate accord and canceling a permit for the Keystone XL oil pipeline from Canada.

Jesse Prentice-Dunn, policy director of the environmental advocacy group Center for Western Priorities, said “the Biden administration is rightfully attempting to take stock of the damage and make sure the agency is following the law.”

But big industry groups American Petroleum Institute and Western Energy Alliance swiftly issued statements condemning the pause and framing it as a threat to the economy.

“With this move, the administration is leading us toward more reliance on foreign energy,” API President Mike Sommers said.

Limits on federal drilling will have the biggest impact on major Western producing states like New Mexico and Wyoming, which depend on revenue from their share of extraction royalties.

In a statement, the New Mexico Oil & Gas Association said that restricting development “risks the loss of more than 60,000 jobs and $800 million in support for our public schools, first responders, and healthcare services.”

White House officials did not immediately return a request for comment.