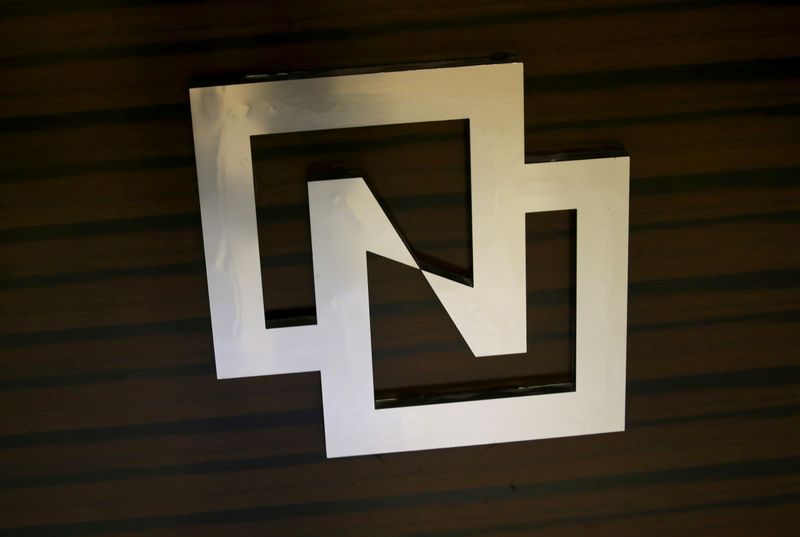 © Reuters. FILE PHOTO: The logo of Tsinghua Unigroup is seen in its office in Beijing

SHANGHAI (Reuters) – Tsinghua Unigroup, a Chinese conglomerate that has long sought to become a semiconductor powerhouse, is now caught between a rock and a hard place as debt woes mount while key chip units are failing to thrive, sources with knowledge of the matter said.

Best known for an unsuccessful $23 billion bid for U.S. chipmaker Micron Technology Inc (NASDAQ:) in 2015, Unigroup in November shocked investors with a default on a 1.3 billion yuan ($200 million) bond. Including that bond, Unigroup has now either defaulted or had cross-defaults triggered on seven onshore and offshore bonds worth about $3.6 billion, according to Refinitiv data.

The state-backed conglomerate, which has warned it may not be able to make upcoming bond payments, had some $31 billion in debt as of late June, more than half of which was due to mature in a year’s time, filings show. In contrast, it had roughly $8 billion in cash and cash equivalents.

The crisis has raised questions about Unigroup’s long-term stability and how much backing the conglomerate, which is 51% owned by Tsinghua University, will continue to be given by Beijing. The central government, keen to develop a weak domestic chip industry, has invested billions of dollars in Unigroup projects as well as in other chipmakers such as SMIC.

Unigroup’s efforts to raise more capital have, however, been stymied by the university’s attempts to offload its stake, in line with a change in government policy in 2018 which called for higher education institutes to divest their business holdings.

Many banks have been reluctant to lend money because Unigroup may soon be without its parent company but at the same time, it can’t easily find a new strategic investor due to its heavy debt load, said a source with knowledge of the matter.

Some attempts to sell the university’s stake to local authorities, such as the Shenzhen government, have fallen through, according to public filings. Sources familiar with the matter said Unigroup is continuing talks with other local governments about potential investment.

Sources were not authorised to speak to media and declined to be identified. Unigroup did not respond to Reuters requests for comment.

In 2015, Unigroup Chairman Zhao Weiguo declared he would spend $47 billion in five years to turn the company, then a little-known maker of chemicals and scanners, into China’s next chip giant, primarily through acquisitions.

But three sources – all current or former senior officials within Unigroup – told Reuters its chip units have not generated hoped-for revenue and its investment strategy was haphazard, with too much money going into unrelated, often unprofitable businesses ranging from real estate to online gambling and an Indian phone maker.

“A majority of the company’s investments are pretty poor, and that’s how they got themselves into this kind of trouble,” said a former Unigroup executive involved in investment.

Unlisted Unigroup does not break down its revenue and profit figures in detail. According to bond analysis firm YY Ratings, chips accounted for at most 20% of Unigroup’s 332 billion yuan in revenue for the first half of 2019, with 69% coming from servers and IT equipment.

Its unit Unisoc, a maker of logic chips for mobile phones, is emblematic of the company’s problems. Formerly called Spreadtrum, it was acquired for $1.8 billion in 2013 and its promise then was such that it attracted a $1.5 billion investment from Intel Corp (NASDAQ:) a year later.

But Unisoc struggled after losing Samsung Electronics (OTC:) Ltd as a client when the Korean giant reorganised its parts procurement, according to a former Unisoc executive.

As the high-end smartphone sector consolidated, Unisoc was left with mostly inexpensive, third-tier brands as customers.

“If you don’t have a top tier customer like Apple (NASDAQ:), Samsung (KS:) or Xiaomi (OTC:), it puts a lot of pressure on the financial side,” said the former executive.

Unisoc then scrambled to diversify into the Internet of Things, automotive chips and even bitcoin mining.

Another major investment that has yet to prosper is YMTC, which Unigroup founded in 2016 with state-backed funding, marking China’s entry into the cut-throat market for NAND chips.

YMTC has since begun mass production of 64-layer NAND flash chips and recently announced it has developed 128-layer NAND flash, which technologically would bring it close to Samsung and SK Hynix.

But in an industry dominated by rivals with decades-long relationships with customers, its market share remains tiny, one of the sources said.

Gu Wenjun, an analyst at research firm ICWise, says that despite its technological strides, YMTC is not competitive due to weak economies of scale and must improve its yields. He estimates that getting to a 20% market share would require an additional $100 billion in investment.

Man who took photo outside Pelosi’s office on Jan. 6 pleads guilty to riot charge By Reuters